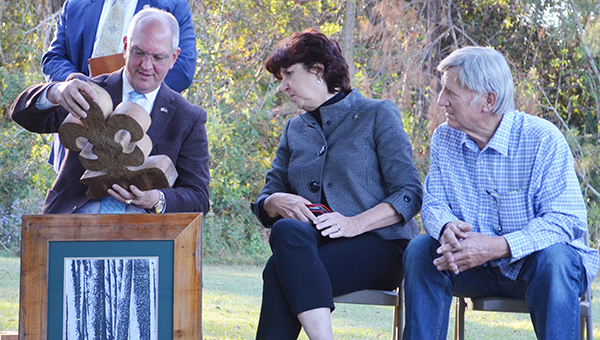 BUSH — For Washington Parish residents, the journey to Louisiana Highway 3241 has literally been a long and winding road. But now there is finally light at the end of the tunnel.

On Friday, Louisiana Gov. John Bel Edwards visited Bush to celebrate the start of the construction of the new four-lane highway, which will effectively connect Bogalusa and Washington Parish to Interstate 12. This project is one of just two remaining as part of the TIMED (Transportation Infrastructure Model for Economic Development) Program, which first began in 1989 and funded a total of 16 projects.

A ceremonial groundbreaking event was held Friday afternoon at the St. Tammany Recreation District, located at 30100 Crawford Cemetery Road in Bush. Among those in attendance were current local officials, as well as past local officials and their families.

Dr. Jerry Thomas, who was state representative in 1989 and successfully carried and passed the bill to fund the TIMED projects, was present Friday.

Thomas said he attended a Rotary Club meeting in 1989 in Bogalusa, where then-Gov. Buddy Roemer spoke with club members to help drum up support for the TIMED program. He said others who were at that meeting included State Rep. Bill Strain, chairman of the House Transportation Committee; State Sen. B.B. “Sixty” Rayburn; and Neil Wagoner, who was Secretary of the Department of Transportation and Development (DOTD) at the time.

Thomas noted that he is the only one of those leaders at that initial meeting who is still alive today.

“It’s a pleasure to be here and see this project happen,” he said.

DOTD Secretary Dr. Shawn Wilson joked that past State Sen. Ben Nevers told him that he wanted to one day ride a wheelchair down the highway once it was completed.

“Senator, we’ll have a wheelchair ready for you to go!” Wilson said, to laughter and applause.

Highway 3241 is a three-phase project, which will create a four-lane highway from the intersection of Louisiana Highway 40/41 in Bush to Interstate 12 in St. Tammany Parish. The first two phases have already been let for bid and contractors have been secured; the third phase is expected to go out for bid in 2023.

Wilson said there would not be any pause in construction until the project is complete.

When Edwards spoke about the project, he paid special appreciation to State Rep. Malinda White. He noted that anytime news of a road project broke, White would either text or call him to “ask about 3241” as well.

“I believed this day would happen and here we are blessed on a beautiful, beautiful day,” White said. “In a moment we will witness a historical time where we connect Washington Parish and St. Tammany to a major thoroughfare.

“I will say in the 32 years of waiting, we have watched decline happen in Bogalusa, but we see hope in our future. We knew that our ancestors that came before us, their vision included (this highway), and now we will see that (happen).”

State Sen. Beth Mizell and Washington Parish President Richard “Ned” Thomas Jr. also spoke of how the highway will be a wonderful thing for the region. Mizell said it will be “literally opening new roads” for improvements to education and economic growth.

Bogalusa Mayor Wendy Perrette also attended Friday’s ceremony, and was glowingly positive about what it could mean for the city.

“This is a once-in-a-lifetime opportunity for our city and parish,” she said. “I’m just glad to be a part of history at this time.”

Also during Friday’s ceremony, Bogalusa woodworking artist Will Branch presented mementos to officials, themed on the lumber industry and its importance to the region. Those who received the mementos included Edwards, Wilson, Dr. Jerry Thomas, Richard “Ned” Thomas, Nevers and members of the late Rayburn’s family.

Late in the ceremony, Nevers joked to Wilson that the highway should be called 3241 because it took “32 years to make it happen,” but will take “41 months to build.”

The first two phases are projected to be completed in late 2023 or early 2024, weather permitting.

Louisiana Gov. John Bel Edwards and other local officials join together for the ceremonial “groundbreaking” of the new Louisiana Highway 3241, on Friday afternoon in Bush.