Bogalusa falls in 2nd round of playoffs 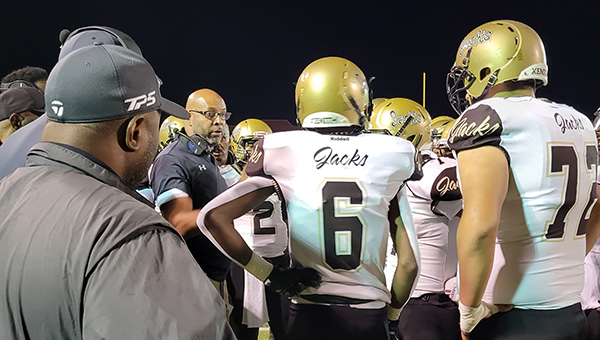 Bogalusa coach Cyril Crutchfield talks to his team during a timeout Friday.

LUTCHER — Bogalusa was defeated by Lutcher, 54-26, in the second round of the Class 3A state playoffs on the road Friday.

Bogalusa trailed just 7-6 with 6:50 left in the first quarter, but Lutcher scored the half’s final 21 points to take a 28-6 lead at the break.

Bogalusa countered with a touchdown of its own on the ensuing drive when Ashton Levi connected with Talik Williams on a 15-yard pass, trimming the lead to 7-6 with 6:56 on the clock.

But Forrest had a run of 18 yards four minutes later to close out the first-quarter scoring, before adding a 14-yard run 6:16 before halftime for a 21-6 lead.

Forrest scored his fourth touchdown in an 11-yard run on the initial drive of the second half. Detillier’s extra point made it 35-6 with 6:53 left in the third quarter.

The game’s next three touchdowns came over a 35-second stretch.

Then Forrest ran it in from 41 yards out on the first play after the kickoff for a 41-14 lead after the missed extra point with 3:45 on the clock.

Just 14 seconds later, Bogalusa responded with a one-play drive of its own when Levi found Aquinas Roberts on an 80-yard connection and it was 41-20 with 3:31 left.

It stayed that way until the fourth quarter when Forrest scored his final touchdown on a 25-yard run for a 48-20 lead with 11:14 left in the game.

The game’s final points occurred 37 seconds later when Tyrek Brown scored on a 56-yard run. An errant snap led to an interception on the conversion attempt in the 54-26 contest.

Bogalusa had four seniors this year. Crutchfield talked positively about the seniors and their contributions.

“They’re a great group of young men. I wish them the best and I wish we could’ve been playing some more games, but the season’s over with. I’m going to take a little time to reflect back and try to move forward,” Crutchfield said.

Sixth-seeded Lutcher improved to 9-1 and advanced to the quarterfinals to play third-seeded St. Martinville.