Bogalusa going against Lutcher this week 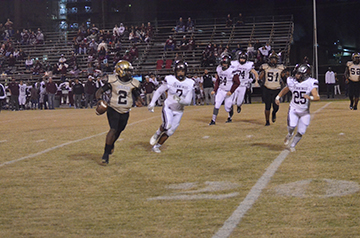 Bogalusa takes to the road this week to play against No. 6 Lutcher in the second round of the Class 3A state playoffs.

No. 11 Bogalusa comes into this week with a 7-2 record and has won five straight games after a 58-26 victory over No. 22 Jennings to start the playoffs last week.

Bogalusa coach Cyril Crutchfield said that Lutcher is probably the best team they have played this season.

“They are extremely well coached,” Crutchfield said. “They run real well on defense. The offensive line is the strength of their team. The quarterback has some weapons outside. We have our work cut out for us.”

“Things were flowing a little bit, but that’s last game and that’s behind us,” Crutchfield said. “What we did last Friday has nothing to do with what happens this Friday.”

Sophomore quarterback Ashton Levi completed 16-of-20 passes for 522 yards and six touchdowns. He also ran for nearly 100 yards. He had 12 carries and finished with for 99 yards and two touchdowns.

Tajdryn Forbes and Aquanis Roberts both caught six passes  each and had more than 100 yards receiving.

Talik Williams made one catch for 92 yards and a touchdown.

Tyron Jackson tallied a reception for 81 yards and a score.

Reynis Morris posted two catches for 30 yards and a score.

“I thought the defense played extremely well collectively as a whole to kind of slow down their offense. The (Trevor) Etienne young man is one of the best players in the state, so to be able to hold him to three touchdowns, one of them was a special teams score, was big for us,” Crutchfield said.

Keyshawn Manning led the team in tackles with eight.

Alijah McClemore posted five stops with one for a loss.

Kenneth Garrett made one tackle.