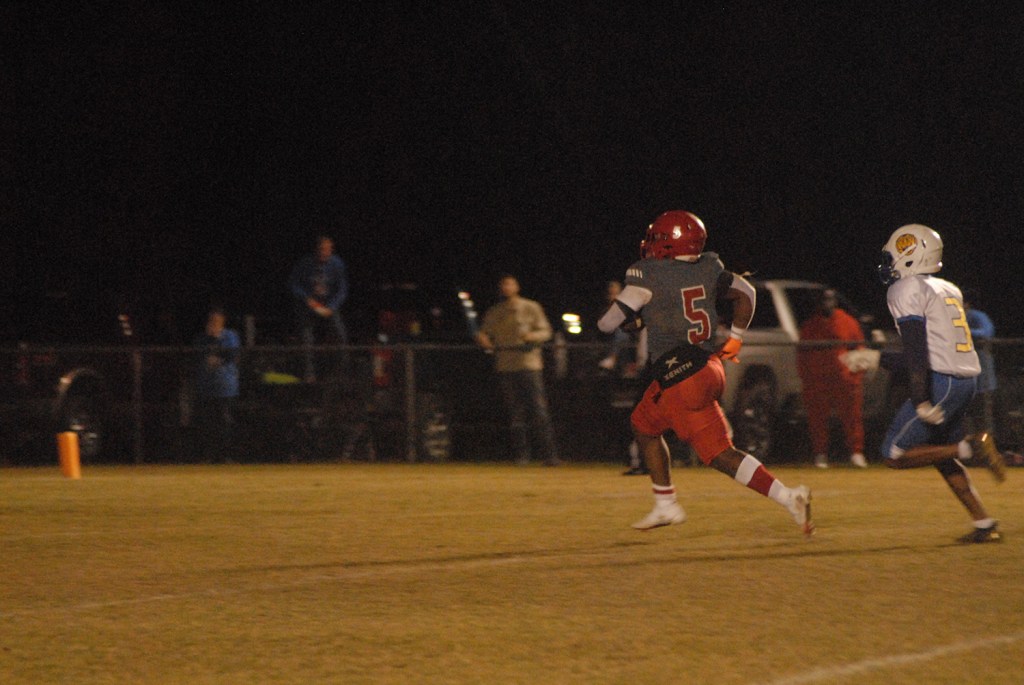 DAILY NEWS PHOTO/Chris Kinkaid Pine's Adrianeun Johnson outruns a defender to the end zone for a touchdown in Friday's playoff game at home.

Pine erased a double-digit deficit, but East Feliciana scored three touchdowns in the final 6:56, as the Raiders were defeated, 55-35, in the opening round of the Class 2A state playoffs at home Friday.

Pine went in front in the fourth quarter.

Ke’Montre Magee scored on a 4-yard run for his third touchdown of the game. LaMarquez Williams ran in the two-point conversion, giving the Raiders a 35-32 lead with 8:37 to go in the fourth.

But 17th-seeded East Feliciana came back on the next possession. Facing fourth-and-6 from their own 47, Mills Dawson connected with Trey’dez Green on a 53-yard pass for the touchdown. Stanley Gilmore ran in the two for a 40-35 lead with 6:56 on the clock.

Gilmore recovered a fumble on the next drive at his 38 and capped off that possession with a 31-yard run and the two-point conversion to make it 48-35 with 4:06 to go.

Pine coach Bradley Seal said his team played hard, but added that they just didn’t make the critical plays when they needed to make them.

“I mean, I hate it, I’m proud of our guys. They played hard, they had a great season, it’s just a tough one to lose,” Seal said.

The first quarter was action-packed as the teams combined for four touchdowns.

East Feliciana kicked off, but the kick deflected off of a Pine player and Gilmore recovered it.

Three plays later, Gilmore put the game’s first points on the board with a 15-yard run. The extra point was blocked, keeping it 6-0 with 10:40 left in the opening quarter.

Pine answered with a touchdown of its own on a 42-yard run by Johnson. Warren’s extra point was good to give Pine a 7-6 lead with 7:23 on the clock.

Back came East Feliciana. Mills Dawson connected with Green on an 11-yard throw for a 12-7 lead with 5:18 to go after the two-point pass was incomplete.

Pine answered once again with Magee scoring on a 9-yard run to put the Raiders back on top, 13-12, following the blocked extra point with 1:20 left.

It stayed that way until the second.

East Feliciana fumbled a fourth-down completion on the next drive that would’ve been close to a first down, which Pine recovered.

East Feliciana scored once more in the second when Mills Dawson and Green connected on an 11 yarder. An unsportsmanlike penalty pushed the conversion attempt back and Pine sacked East Feliciana on the two-point conversion to keep the 20-18 lead at halftime.

The Raiders went 6-4 this season.

Pine had six seniors on the team.

“Small group, but they had a helluva season. They had a great season. We’ll miss them. They all had a key part in the year,” Seal said.