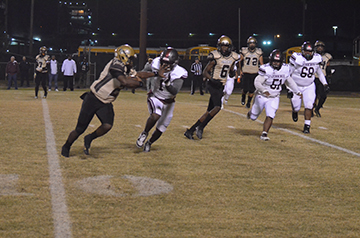 Bogalusa sophomore quarterback Ashton Levi scored eight touchdowns Friday night to help the Lumberjacks to a 58-26 win over Jennings in the first round of the Class 3A playoffs.

According to unofficial statistics, Levi finished 15-of-19 passing for 473 yards and six touchdowns. He also ran 13 times for 98 yards and two more touchdowns.

Perhaps making the night more amazing — Levi was actually 0-for-4 on his first four pass attempts of the game.

“We knew that we just wanted to stay within our offense, and things would get clicking for us,” Bogalusa coach Cyril Crutchfield said. “Once we started getting in gear, we were really able to take control of the game.”

Crutchfield said that it is impressive that Levi has taken such command of Bogalusa’s offense despite only being a sophomore.

“You know how Stephen A. Smith calls (Green Bay Packers quarterback) Aaron Rodgers a ‘baaaaaad man?,’” Crutchfield said. “Ashton is like that. He’s a baaaaaad dude.”

Although Bogalusa came away with a relatively easy victory, the Lumberjacks trailed early. After an initial drive stalled out, Bogalusa punted and it was recovered by Jennings’ Trevor Etienne — a four-star recruit who is the younger brother of Clemson star and current Jacksonville Jaguars running back Travis Etienne.

Etienne caught the punt at the Jennings 34 and then returned it for a touchdown. Jennings’ extra point was no good and the visitors led 6-0 with 9:14 left in the first quarter.

From that point on, Bogalusa made sure to not let Etienne catch the ball on special teams again. On every kickoff, the Lumberjacks attempted a short pooch kick to keep the ball away from Jennings’ standout.

“That was definitely our plan,” Crutchfield said. “We did not want to give him the ball in the return game.”

On the next drive, Bogalusa went 62 yards in six plays. Levi closed out the drive with a 9-yard touchdown run and also scored the two-point conversion with a run, putting the Lumberjacks ahead 8-6 with 7:16 left in the first quarter.

Jennings moved back in front with 6:22 left in the first quarter when ReJohn Zeno scored on a 26-yard touchdown run. Peyton Herpin’s extra point made the score 13-8 in favor of the visitors.

The Lumberjacks responded on their next drive, with Levi connecting with Taydryn Forbes for a 47-yard touchdown reception. Forbes also scored the two-point conversion with a run to give Bogalusa a 16-13 lead with 5:38 left in the first quarter.

Levi later added a 16-yard touchdown run to put Bogalusa ahead 22-13 after a failed two-point conversion with 2:30 left in the first quarter. Jennings cut the lead to 22-20 with 9:37 left in the second quarter, as Jarmaric McZeal ran for a 3-yard touchdown and Herpin added the extra point.

Those would be Jennings’ last points of the first half, as Bogalusa scored 28 unanswered points to take a 50-20 lead into the halftime break. The Lumberjacks’ next three scoring drives were one play, one play and two plays.

Levi completed an 81-yard touchdown pass to Tyron Jackson with 9:10 left in the second quarter, and Levi also added the two-point conversion run to increase Bogalusa’s lead to 30-20.

Levi connected with Forbes for a 61-yard touchdown pass with 6:30 left in the second quarter, putting Bogalusa up 36-20 after the two-point conversion failed.

Finally, Levi completed an impressive 92-yard touchdown reception to Talik Williams with 3:40 left in the second quarter. A Jennings defensive back got a hand on the pass, but Williams caught it off the deflection and then broke away for the score. The two-point conversion failed, but Bogalusa still led 42-20.

The Lumberjacks added one more scoring drive after the long Williams catch, as a Jennings player muffed the kickoff return and Bogalusa recovered it. The drive concluded when Levi completed a 20-yard touchdown pass to Reynis Morris with 2:30 left in the second quarter. Levi also passed to Morris for the two points.

The second half saw each team score one more time each.

Etienne ran for a 42-yard touchdown run with 8:10 left in the third quarter, but the Bulldogs failed on a two-point conversion, making the score 50-26 in favor of Bogalusa. With 2:50 left in the third quarter, Levi passed to Forbes for a 25-yard touchdown reception, and completed a two-point conversion pass to Morris for the Lumberjacks’ final points of the night.

Crutchfield said he was happy to let his team celebrate the win, but they would get right back down to business as they get ready for the second-round opponent.

“We’re going to enjoy this one until the stroke of midnight tonight,” he said. “After that, it’s on to getting ready for Lutcher.”