Franklinton falls in District 9-4A opener 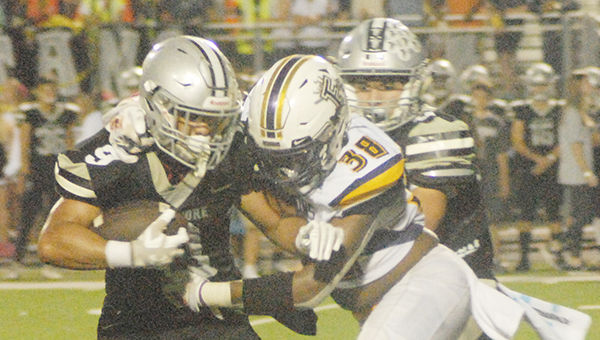 MANDEVILLE — Franklinton was defeated by Lakeshore, 42-0, in the District 9-4A opener on the road Friday.

Lakeshore scored three touchdowns on offense with drives of 51, 18 and 13 yards.

“We did some good things defensively, but it’s the simple mistakes that keep hurting us on defense, so we’ve gotta clean that up,” Franklinton coach Jonathan Barber said. “Like you said, we lost all three phases of the game in the first half. They scored on special teams, on our offense and on our defense. When that happens, if you turn the ball over against a team you feel like you’re pretty similar to, then things can kind of get away from you and that’s what happened tonight.”

Franklinton allowed points in all three phases in the first half.

The first came when Josh Ray blocked a punt and then picked up the ball and ran about 35 yards to the end zone. Megan Gettys was good on the extra point to make it 7-0 with 3:56 left in the first quarter.

Lakeshore went up 21-0 with 8:22 left in the second when Landen Schlink recovered a Franklinton fumble in the end zone for a 21-0 lead after Gettys’ point after.

It stayed that way through halftime.

Lakeshore went up 28-0 through three quarters. A low snap got past Franklinton’s punter and he was tackled after he picked up the ball and ran with it. A flag on Franklinton moved the ball to the Franklinton’s 18 and Lakeshore scored on the first play when Ray posted his third touchdown with this one on an 18-yard run. Gettys’ extra point made 28-0 at the 8:17 mark.

Antoine Labostrie picked up a Franklinton fumble and returned it about 20 yards. Gettys was good on the extra point for a 35-0 lead with 9;24 to go.

The final score came on a Franklinton fumble that Jayden McClain recovered. Jaden McCall scored the final touchdown on a 4-yard run. Gettys’ extra point made the score 42-0 with 2:30 on the clock

Franklinton (3-5, 0-1) will be back in action on Friday when they play against Salmen in the Demons’ final regular season home game this year.

Lakeshore (3-4, 1-0) will play again on Friday at home against Pearl River.