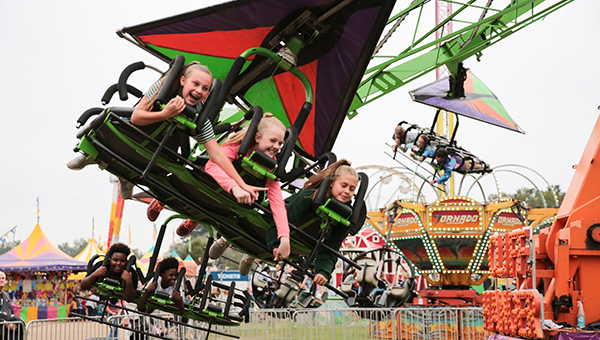 After a nearly two-year absence due to the COVID-19 pandemic, the Washington Parish Free Fair will welcome visitors for the 109th time starting Wednesday, Oct. 20, in Franklinton.

The festivities kick off Wednesday, Oct. 20, at 10 a.m. with the fair parade. This year’s theme is “Country Nights and Carnival Lights.” The official opening ceremony will be held at noon.

This year’s fair will include a variety of live entertainment, including country superstars Frank Foster and Coffey Anderson, on the main stage. In addition, more musical performances will be held throughout the fair at the “Down by the Branch” stage near the Mile Branch Settlement.

Visitors should be reminded that there is a state mask mandate for any indoor activities.

The fair’s official website is www.thefreefair.com. In addition, inside the weekend, Oct. 16-17, 2021, edition of The Daily News is a special 64-page magazine full of lots of information about the fair and its related activities.

Information about Down By The Branch performances was not available by the magazine’s press time, but is published below:

One of the all-stars of the New Orleans street music scene, Huang’s unique violin-playing has brought joy to many over the years. Originally from Taiwan, Huang began playing violin at the age of 6, shortly after moving to the United States. Classically trained, she grew up competing and has performed with various symphonies. She has a master’s degree in violin performance from Tulane University and her performances have appeared in television and film. Still going strong, she has been playing in the streets of New Orleans for almost 20 years.

There is a fresh, new sound resonating from the northeast corner of the Magnolia State. With influences ranging from rock, country, gospel and soul, Breaking Grass is a solid combination of all the sounds you have grown to love and more. Known for their high-energy performances and original material, this band delivers heartfelt music with haunting harmonies to match. Their new album “Cold” debuted at No. 2 on Billboard’s bluegrass charts and is being played by DJs from all corners of the globe. If you have never been a fan of bluegrass music, it might be because you haven’t heard it quite like this.

The Baker Family returns to Down by the Branch for another year to wow audiences with their soulful mix of bluegrass, gospel and classic country. This bluegrass band from Birchwood, Mo., has performed throughout the United States from Maine to California. Named 2016 International Country Gospel Music Association Bluegrass Band of the Year, the group also won first place in the Silver Dollar City Youth In Bluegrass Championship.

Returning to the Down by the Branch stage are the popular, crowd-pleasing Victory Belles. The Victory Belles take you on a nostalgic journey through World War II-era musical classics. Enjoy a trip down memory lane with their spirited performances of such hits as “Boogie Woogie Bugle Boy,” “Don’t Sit Under the Apple Tree,” “Chattanooga Choo Choo” and “I’ll Be Seeing You,” all sung in rich, three-part harmony. The trio performs at The National World War II Museum as well as other events around the country. The Victory Belles will treat the Down by the Branch audience to a performance of timeless 1940s treasures while keeping America’s magical musical history alive!

The Allens — Thursday at noon

The Allens have been thrilling audiences worldwide with their unique blend of family harmony and energizing creativity for more than two decades.

In 1996, Todd and Michelle Allen began the journey to follow a call to full-time evangelistic ministry with their four young children, traveling all across North America in motor homes and buses. With the addition of more voices came the innovative, modern sound that has captivated thousands. Now, after more than 20 years of ministry, The Allens continue to be one of the signature faces of the new gospel music movement, making an impact for Christ around the world.

While their sound is a fresh blend of iconic harmonies and worshipful anthems, the power of their music is in the message of truth and hope that radiates throughout their ministry. Defined by a passion for music that ministers through inspiring lyrics, the heartbeat of their ministry is a desire to reach the world with the gospel of Jesus Christ.

The Allens have traveled to all parts of the country sharing their music and ministry. A few of the venues where they have performed include Gatlinburg Gathering (Gatlinburg, Tenn.), Singing in the Sun (Myrtle Beach, S.C.), The National Quartet Convention (Pigeon Forge, Tenn.), The Southwest Gospel Festival (Phoenix, Ariz.) and an eight-year seasonal performance in Branson, Missouri.

Joel Galloway and The Boys — Saturday at 8 p.m.

Joel Galloway and The Boys bring their classic country and light rock and blues to the Down by the Branch stage. Galloway has been playing music since he was 12, and for the last five years has been a fixture on the live music scene in Washington Parish, its surrounding areas and venues across the Gulf South. In 2016, Galloway won a regional music competition held by NASH FM WRKN–New Orleans and advanced to the Top 50 national semifinals in Nashville. His original song “Here’s to the Working Man” helped him advance through the contest and is now part of his regular performances.

Lead guitarist Bobby Breland started playing rhythm and eventually lead guitar at the age of 14. His first musical artist influence was Garth Brooks and he draws inspiration and creative influence from guitarists/vocalists ranging from the late Merle Haggard to Jimi Hendrix, John Mayer, Tony Rice and beyond. “Bobby has the distinct ability to jump into a song he’s never heard and immediately play it better than you’ve ever heard it played,” Galloway said. “I’d put him up against anyone in the world, but I wouldn’t trade him for a one of them.”

One of Washington Parish’s most well-known artists, Big Daddy O returns to bring his music to the Down by the Branch stage. At 6-foot-6, Mt. Hermon native Owen Tufts’ large frame supports an even larger voice that pulsates from a powerful shout down to a beautiful whisper. For more than 30 years, Big Daddy O has been playing in roadhouses and bars in the Delta area near the Louisiana-Mississippi border. The last decade has seen him perform from Hawaii to Florida and Seattle to New Hampshire, while receiving airplay on over 300 radio stations around the world.

Performing traditional bluegrass along with gospel, the Last Chance Bluegrass Band treats audiences to traditional hard-driving bluegrass, bluegrass ballads, and down-home bospel music right out of the hills and the Readback Hymnals.

The Abita Opry described the group as playing “straight out bluegrass, and they enjoyed themselves in the process. Their enjoyment in performing those great songs is contagious and we are fortunate to have them as one of our house bands.” The group’s motto: Have Strings, Will Travel …

Stormy, the Band is billed as one of the hottest and most versatile bands in the South. The popular cover band from Baton Rouge has a song list about as versatile as the group’s abilities. From top 40 to country, rock, soul, funk, R&B and big band, Stormy offers something for the entire crowd. The eight-piece band includes a female vocalist, a solid rhythm section and great horns. Every band member sings so you will not get tired of the same voice during the performance. Stormy, The Band has performed in Texas, Alabama, Florida, Mississippi and all over Louisiana while pleasing all ages. The band has backed The Platters, Percy Sledge, Luther Kent and many others.

Stormy, the Band will perform a special show Friday afternoon at Down by the Branch. The talented cover band will perform some of the greatest hits from days gone by in a special “Decades” show. If you’re a fan of the hits from one of the most popular generations of music, this is the show you won’t want to miss.

Making a return to Down by the Branch is Los Super. The bilingual group from south Mississippi puts a Spanish twist on some of America’s most favorite songs. Led by lead singer and guitarist Oscar Castro and guitarist/singer Mario Arzate, the group entertains audiences with their energy and excitement while making the audience want to join along.

Castro has performed with well-known local star Elliott Small, better known as “Grandpa” to those who have frequented Down by the Branch in past years. The duo performed in New Orleans as well as Down by the Branch and sang popular tunes such as “Only You” and “Stormy Monday.”

The group entertains with songs such as: “The Highway Patrol,” “The Devil Went down to Georgia,” “Kryptonite,” “House of the Rising Sun,” “My Girl,” “Sweet Home Alabama,” their own version of “Old McDonald’s Farm” and many others.

The Darryls are best known in the Franklinton area as being the house band in the Hee Haw play put on by members of the Franklinton Community Theater. The play was a smashing success and three sold-out audiences enjoyed the entertainment highlighted by these talented musicians.

The Darryls are a bluegrass, gospel and country band that started in 2014 in south Louisiana. The band can be heard anywhere from local fairs, church revivals, family reunions and most anywhere else music can be found.

Landon Magee returns for another year at Down by the Branch. Magee performed locally with friends before moving to Nashville to further his music career. He has been a regular performer at Tootsies on Broadway and has played the Listening Room Café in Nashville. A songwriter at MixTape Music Publishing, his new single “Find Me” is available for download.

Magee has spent a lot of time writing his own music and released his first single “That’s What She Said” to iTunes, Spotify and all music distribution sources. The song reached the airwaves when radio station KBON placed it in their rotation.

Magee has opened for music superstars such as Clay Walker and Colt Ford in Ohio, while also taking his talents to Georgia and other locations.

‘The Museum’ opens for visitors Oct. 16