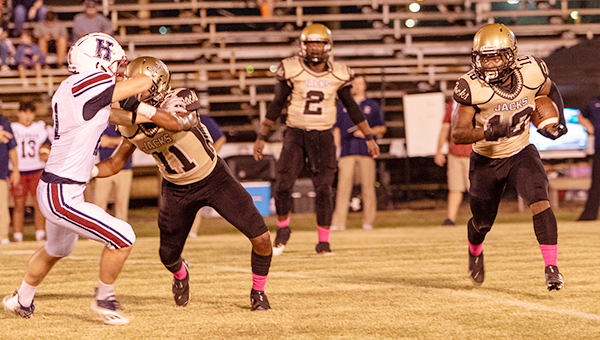 Bogalusa’s Talyn Williams runs the ball as Tyron Jackson goes out to block for him downfield.

With just four seconds left on the clock and his team down 36-34, Bogalusa quarterback Ashton Levi made a successful play for the fate of the game with a keeper from 9 yards out — bringing a 40-36 victory to the Lumberjacks’ homecoming game over Archbishop Hannan.

It was a tough game for the Lumberjacks, as both teams fought hard early.

Halfway through the second quarter, Bogalusa’s Ashton Magee intercepted a pass from Hannan quarterback Billy Colomb at the 40-yard-line. With great field position, the Lumberjacks pushed downfield with a five-play drive that ended with a pass from Levi to Tajdryn Forbes from the Hawks’ 41. Forbes ran it in for the first touchdown of the game. Levi attempted the two-point conversion but could not push through and the score was 6-0 with seven minutes left in the first half.

The Hawks answered back with a quick drive of their own. Colomb handed off to Joshua Alonzo from the 11 for a touchdown. James Pham made the extra point kick and the score was 7-6 in favor of the Hawks.

Back in possession, the Lumberjacks made it downfield again. From the Hawks’ 18, Levi passed to Tryon Jackson, who ran it in for the touchdown. The two-point conversion attempt failed again and the score went to 12-7. The Hawks answered right back and put another touchdown on the board, as Colomb ran in a quarterback keeper from the Bogalusa 2. Pham’s kick was good and the Hawks led at halftime, 14-12.

In their first possession of the second half, the Hawks forced the Lumberjacks to a punt. Bogalusa fumbled the punt snap, which was recovered by Hannan’s Braden Neal and returned for a touchdown. Pham’s kick was good and the score went to 21-12 in favor of the Hawks.

The Lumberjacks answered back with a long drive downfield. With four minutes left in the quarter, Levi kept the ball from 18 yards out to score the touchdown. Levi then handed off to Taydryn Forbes, who pushed through for the two-point conversion and brought the Lumberjacks within one point at 21-20.

Both the Hawks and the Lumberjacks put another touchdown on the board in the third quarter. Colomb passed to Billy Rabensteiner from the 49 yard line for Hannan’s touchdown. Pham’s kick was good and the score went to 28-20.

Levi then responded with a touchdown pass to Reynis Morris from the Hannan 17, as he ran it in for the Lumberjacks’ fourth touchdown. The conversion failed and the score went to 28-26, with Hannan in front.

The defense for both the Hawks and the Lumberjacks hardened down. Back in possession and with poor field position, the Lumberjacks took a safety, putting the score to 34-30.

The Hawks came back and put their final touchdown on the board with a pass from Colomb to Alonzo from the Bogalusa 25. Pham’s kick went wide and the score went to 36-34 with 47 seconds left in the game.

From there, Bogalusa came up with its late-game heroics and came away with the hard-fought victory.