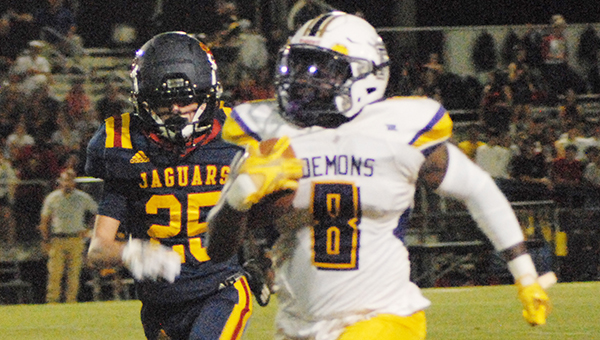 SLIDELL — Franklinton was solid in all aspects of Friday’s 53-8 win over Pope John Paul II on the road.

The Demons (3-4) received the opening kickoff and went 67 yards, capped off by Kelly Daniels scoring on a 16-yard run. Franklinton lined up for the extra point, but Pope John Paul II jumped offsides, so the Demons went for two and Khaled Waliagha ran it in to make it 8-0 at 1:10 into the game.

“Our plan was to start fast,” Franklinton coach Jonathan Barber said. “We thought our biggest advantage was on the perimeter. We were able to get the ball out there. We actually were going to onside kick on the first kickoff and it hit one of our players, so it didn’t work out for us. But we wanted to be aggressive, be really aggressive, start fast and we were certainly able to do that in that first quarter. I think we scored (22 points) and kind of took control of the game there.”

Daniels accounted for three touchdowns, with one rushing and two receiving.

“He was special,” Barber said. “I was glad we were able to get him the ball the way we were, in space. He was dynamic, so I was happy for him. He’s put in a lot of hard work. He’s battled through some little bumps and bruises, but boy he looked dynamic tonight.”

Franklinton was back on the board four plays later when Zion Anders connected with Glen Mark on a 63-yard play. Mark caught the pass across the middle, juked a defender and went the distance. Cole Colletti made the extra point and it was 15-0 with 7:53 left in the first.

Keyon Nelson scored the Demons’ next touchdown with a 12-yard run. Colletti hit the point after to make it 22-0 with 1:49 to go in the first and it was 22-0 through one quarter.

Franklinton added seven points to its lead 45 seconds into the second quarter, when Anders hit Daniels on a 40-yard passing play. Colletti’s extra point made it 29-0.

The first came with Anders connecting with Daniels on a 34-yarder with 2:24 left. Senqualon Conerly intercepted a pass with 39 seconds left and returned it to Pope John Paul II’s 15.

On first-and-12, Nelson took a handoff left and scored with 18 seconds left. Colletti made both extra points for a 43-0 lead at halftime.

Waliagha tallied from the 3 on Franklinton’s first drive of the second half and Colletti’s extra point gave the Demons a 50-0 lead with 7:14 left.

Michael Ballard recovered a fumble and Franklinton capitalized when Colletti hit a 36-yard field goal for a 53-0 lead.

Pope John Paul II (4-3) broke up the shutout late in the fourth quarter when Blaze Rodriguez scored on a 5-yard run with 1:21 left. Bogalusa resident George Arata ran in the two-point conversion to account for the 53-8 final.

Arata unofficially ran for 83 yards in Friday’s game. Two other players for Pope John Paul II are from Bogalusa, including Cael McDaniel and Will Culpepper.

Both teams will be on the road Friday for their next games. Franklinton will back in action against Lakeshore to begin District 9-4A play, and Pope John Paul II will be playing at Springfield.