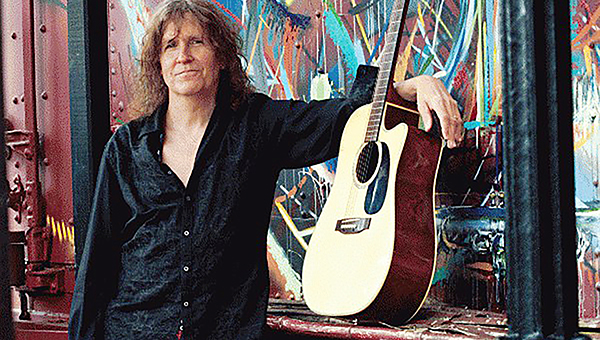 Randy Jackson, a member of the band Zebra, will be the headline performer at Saturday’s downtown music festival, with his “A Tribute to Led Zeppelin” at 7:30 p.m.

“A Cultural Celebration,” a live concert and downtown street festival, presented by the Bogalusa Historic Cultural District, will be this Saturday, Oct. 16, from 3 p.m. until 10 p.m.

Bring a lawn chair to the grassy lawn in front of The Daily News to enjoy this concert, which is free to the public. Scheduled acts in the music line-up include Randy Jackson of Zebra, A Tribute to Led Zeppelin; The Chad Harry Experience; Claire Kellar; The Rezonators; and a street performance by saxophonist Steve Burke.

Claire Kellar, 4:30 p.m. — Claire Kellar is 2016 graduate of Franklinton High School and is from Bogalusa. She attended Young Americans College of the Performing Arts in Southern California, where she was selected to be a featured performer on a national tour.

Kellar recorded her first EP in Nashville with Shuffle Brothers Studio in 2019. She plans to be back in the studio soon for a follow up to her first EP. She has opened for country music hit writers such as Baton Rouge native C.J. Solar, Brent Anderson, Rick Huckaby and Blake Griffith.

She will be playing in the Ozone Songwriting festivals’ songwriting showcase on Nov. 5, where she will be opening for Rock and Roll Hall of Fame member, Jonathan Cain, keyboardist and songwriter of Journey, as well as country music mega-hit writers Gary Baker and Greg Barnhill.

The Rezonators, 6 p.m. — The Rezonators is a five-piece classic rock band from the North Shore that plays the greatest hits from the 70s, 80s and 90s. Shown are, left to right, Brian “Bambi”Mizell, Erwin Bankston, Greg Wilkinson, Mark Haun and Tony Bruno.

Headliner act, Randy Jackson, “A Tribute to Led Zeppelin,” 7:30 p.m. — Randy Jackson is an American rock musician from New Orleans, best known for his role as frontman for the band Zebra. He was born and raised in New Orleans. In addition to his career with Zebra, he is a Long Island Music Hall of Fame inductee, a Louisiana Music Hall of Fame inductee, and has toured with Jefferson Airplane and tributes to Led Zeppelin, Pink Floyd and The Doors.

In 1973, he joined Shepards Bush as lead guitarist. It was here that he met Felix Hanemann. Hanemann worked at Jazz City Studios in New Orleans owned by Cosimo Matassa. Shepards Bush recorded a demo at the studio which was Jackson’s first experience in a recording studio. Jackson and Hanemann left Shepards Bush a year later. They soon met drummer Guy Gelso and formed “Zebra” in 1975. It was at this point that Jackson started singing lead vocals. After playing the New Orleans area for two years, Zebra moved to Long Island in New York in 1977 and dedicated themselves to playing in that area’s club and college scene, mainly as a cover band. Even with their limited selection of original music. Zebra was talented enough to impress Atlantic Records, who signed the group to a five-album deal right out of the gate in late 1982.

Their first album, Zebra, was produced by Jack Douglas, went gold and was the fastest selling debut album in the history of Atlantic Records. Zebra sold over 75,000 copies in its first week and spent eight months on the Billboard charts, peaked at number 29. During the next couple of years Zebra played opener for Aerosmith, Journey, ZZ Top, Loverboy, Cheap Trick, Sammy Hagar and REO Speedwagon.

The group has produced five albums and five videos with combined sales of over 2 million.

In addition to working with Zebra, Jackson performs lead vocals for The Music of Led Zeppelin, The Music of Pink Floyd and The Music of The Doors, tributes to the eponymous bands as backed by an orchestra. He also frequently plays live acoustic shows across the country.

Stephen Burke, 3:15-7:15 p.m. on the street — Stephen Burke is a saxophonist and vocalist who was born and raised in New Orleans and was heavily influenced by the music scene during his formative years. His diverse background in all types of music has certainly been the reason he is one of the most sought after musicians in the New Orleans scene.

A graduate of music from Loyola University, Burke has played with most of the New Orleans greats and was the leader of the Frankie Ford (Seacruise) band for over 20 years. During his career, he has played or jammed with everyone from Robert Plant, Lou Rawls, Martha Reeves, Mary Wells, The Coasters, Platters, Drifters, Shirellees, Crystals, Lou Christie, Freddie Cannon, Dell Shannon, Little Anthony and the Imperials, Leslie Gore, the Marvelettes, as well as many local greats such as Irma Thomas, Allen Toussaint, Dixie cups, Frogman Henry, Jean Night, Ernie Kado, just to name a few.

Burke has also traveled with the Grammy nominated Dwayne Dopsie on tour through Germany, Switzerland, Georgia, Finland, Italy, Ecuador and Spain. Additionally, he has been a featured guest with the New Orleans Brass Connection and the Hurricane Brass Bands at festivals in Davos, Ascona and Liechtenstein over the past several years. Also, as a member of the award-winning Storyville Stompers Brass Band, he has played the Macau Jazz Festival in China, the New Orleans Jazz and Heritage Festival, the French Quarter Festival, Tomato Festival and Satchmo Fest, just to name a few.

Presently, Burke plays along with several different local bands and as of late was featured at the famous Antoine’s jazz brunch in New Orleans. With the Déjà Vu band, a band formed with some of New Orleans’s famous musicians, Burke plays sax and sings.