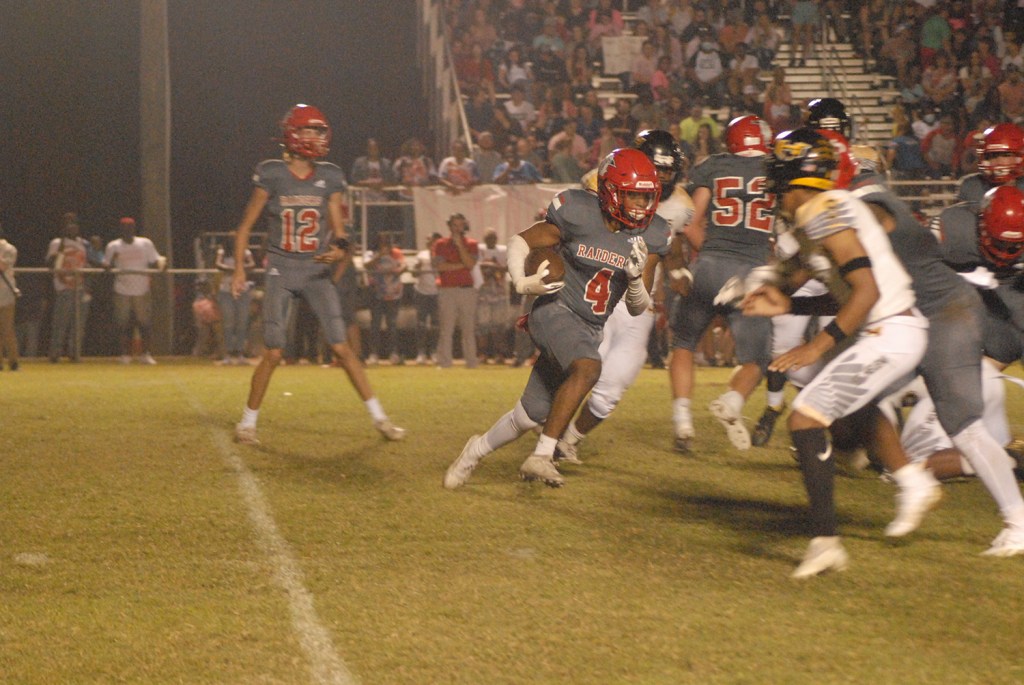 Pine’s Adrianeun Johnson had another solid night of running, going for 292 yards unofficially with five touchdowns in a 40-28 victory over St. Helena College and Career Academy on Homecoming night to start District 9-2A play.

The game was tied at 14-14 at halftime, but Pine outscored St. Helena 26-14 in the second half, with Johnson continually making big plays in the running game and the defense coming up with two huge interceptions.

“That was awesome,” Pine coach Bradley Seal said. “I mean, look, I can’t say enough about No. 5 (Johnson). I mean, people don’t want to (tackle him). He just breaks teams. I mean, they load the box. That one (big play), they had a free guy. He ran him over like … He’s just a great football player. Credit to our team. That’s a great team win. That’s a program win right there.”

The play Seal was talking about occurred late in the fourth quarter and ended up with a 59-yard run on the game’s final drive. The Raiders ran out the final 5:33 after Ethan Rawls intercepted a pass with St. Helena driving and having the ball at Pine’s 5.

Pine (4-1, 1-0) opened the scoring when Johnson capped off the game’s first drive with a 7-yard run. Austin Warren’s extra point split the uprights and Pine was up 7-0 with 8:39 on the clock.

St. Helena responded on the next possession with Corey Griffin Jr. running it in from 13 yards out. D.J. Garrett intercepted the two-point pass, keeping it a 7-6 contest with 6:40 left in the first quarter.

It stayed that way until Johnson scored his second touchdown with a 5-yard run for a 14-6 lead after Warren’s point, just 41 seconds into the second quarter.

St. Helena evened it at 14-14 late in the second when Griffin connected with Javant Dunn on a 33-yard pass. Baker Moses ran it in for two and the teams were tied at 14-14 at halftime.

St. Helena took the lead on the first play of the second half. From his 35, Griffin ran and kept moving the pile. As he reached Pine’s 41, he lateraled to Antoine Baker, who got free and ran up the right sideline for the score. The two-point conversion was no good, keeping it 20-14 with 11:27 on the clock.

Pine responded nearly three minutes later when Johnson broke loose on a 50-yard run and Pine retook the lead, 21-20, after Warren’s extra point with 9:32 left in the third quarter.

Baker scored on a 10-yard run on the next drive and converted the two for a 28-21 lead with 6:21 to go in the third quarter, but Pine scored the game’s final 19 points.

First, Johnson tallied on a 36-yard run. Warren’s extra point was good and the game was tied at 28-28 with five minutes left in the quarter.

Pine’s defense came up big when Anterrius Walker intercepted a pass and took it back about 80 yards for a touchdown. A penalty moved the extra point back 15 yards and the kick came up short, keeping it 34-28 with 3:06 to go in the third quarter.

It stayed that way until the fourth period when Johnson made it a two-possession game with a 23-yard touchdown run. The two-point conversion was no good, but Pine had a 40-28 lead with 7:58 left in the game.

St. Helena drove the next possession to Pine’s 5, but Rawls picked off a pass with 5:33 left and the Raiders ran out the clock for the win.