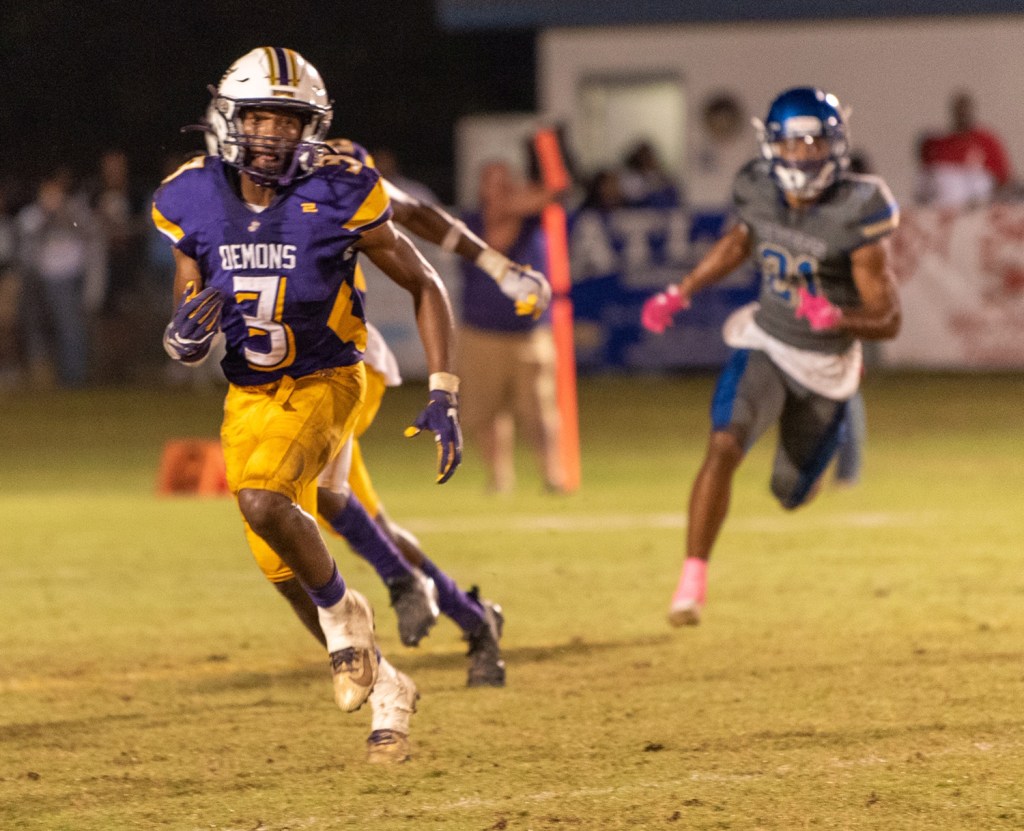 The Franklinton Demons hosted the Tylertown (Miss.) Chiefs on Friday in the Demons’ sixth game of the season. Franklinton went into the game after a victory over Belle Chase the previous week. Tylertown was undefeated with six wins in the season, prior to Friday’s game.

Ultimately, the visitors from Mississippi came away with a decisive win, beating Franklinton 56-10 in the Demons’ homecoming game.

The Chiefs’ offense was relentless, with seven touchdowns and a safety in the first half. Chiefs Quarterback Amerion Jefferson ended their first possession with a pass to Jeremiah Dillion from the Demons’ 37-yard-line for the first touchdown. They missed the extra point and set the score at 6-0 two minutes into the game.

With two minutes left in the first quarter, Jefferson passed to Jordan Anthony from the 31-yard-line for a touchdown. Jefferson failed in his attempted extra-point kick and the score moved to 20-0.

In the kickoff that followed, Franklinton’s Glen Mark caught the kick and attempted a lateral pass inside the Demons’ 10. Tylertown’s Demario Harrell intercepted the pass and scored the Chiefs’ fourth touchdown. The Chiefs failed at their two-point conversion attempt and the score was 26-0 and the end of the first quarter.

The second quarter opened with a pass from Jefferson to Dillon from the 35 yard line for a touchdown. The Chiefs again failed in their conversion attempt and the score went to 32-0. Three minutes later, Jefferson handed off to Ahmad Thompson at the 22-yard-line. Thompson carried around the left side for the touchdown. Jefferson was successful with a quarterback keeper for the two-point conversion and the score moved to 40-0.

The Demons returned the kickoff to their own 42 yard line. Quarterback Zion Anders passed to Keyon Nelson, who caught it at the Chiefs’ 35 yard line and ran it in to put the Demons on the board. Cole Colletti was successful in his extra point kick and the score went to 40-7.

The Demons were able to force a punt in the Chiefs’ next possession. However, that punt put the Demons on their own 4-yard-line. The Chiefs pushed through the Demons’ defense and sacked Anders in the end zone for a safety, putting the score at 42-7.

The second half saw far less action. In the third quarter, Jefferson handed off to Ellzey from the 20-yard-line as he put the Chiefs’ final touchdown on the board. Jefferson failed in his attempted extra point kick and set the score at 56-7.

In the Demons’ last possession of the game, Colletti kicked a 37-yard field goal and set the final score at 56-10.

On Friday, the Demons travel to play Pope John Paul II in Slidell.