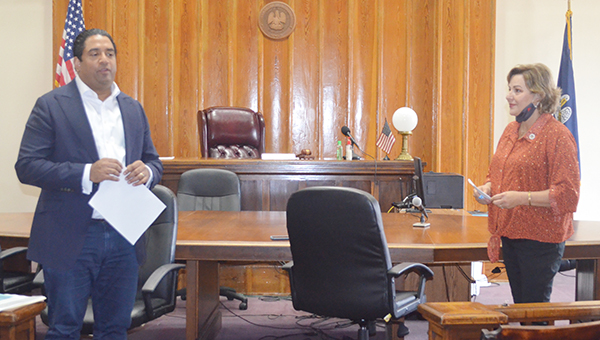 Two meetings were held in Washington Parish on Friday, Oct. 1, as officials from the Louisiana Office of Broadband Development and Connectivity (ConnectLA) explained what the state is doing to “eliminate the digital divide” for citizens without access to high-speed internet services.

Veneeth Iyengar, executive director of ConnectLA, spoke to a crowd of about 20 citizens at Bogalusa City Hall. State Rep. Malinda White was in attendance and hosted Iyengar; State Sen. Beth Mizell hosted him at a similar event in Franklinton later that day.

Iyengar explained that ConnectLA has a vision of improving broadband internet servies — defined as speeds of at least 25 Mbps for download and 3 Mbps for upload — statewide by 2029. There are three factors in this vision: improved infrastructure and access, improved affordability, and improved digital literacy/technology knowledge.

One of the programs that could help with the improved infrastructure is known as the GUMBO grant program. GUMBO stands for Granting Unserved Municipalities Broadband Opportunities, and the first application process for municipalities is scheduled for Nov. 1 through Dec. 31 of this year.

Iyengar explained that municipalities can partner with private internet providers through programs like GUMBO, to ensure that those companies meet the needs of those who do not have sufficient access to high-speed broadband. The state has committed to spending nearly $120 million over the next three years toward the improvement of broadband, he said.

According to a study by ConnectLA, the Federal Communications Commission estimates that more than 25,000 parish residents do not have access to broadband. This is more than half of all residents — 53.31 percent, to be precise.

Iyengar encouraged parish citizens to visit the website connect.la.gov to participate in a “speed test,” which will let the state know the quality of their personal internet connection. He suggested doing it several times a day, including in the morning as well as during more peak evening hours.

In addition, he said that many citizens may be entitled to a government benefit toward their internet bills. He noted that the ConnectLA website has more information about these programs and those who may be eligible.

Iyengar said that the most important thing is for local governments to be organized and aggressive in seeking out GUMBO grant opportunities. White noted that the Washington Parish Government has been already organizing a “broadband team” in anticipation of the coming application period.

“It is just like a highway or a bridge,” she said. “It’s important to our community.”

Following his remarks, Iyengar took several questions from members of the audience. At times, he appeared surprised to hear how limited the local internet options were.

For more information on GUMBO and other broadband opportunities, visit online at connect.la.gov.