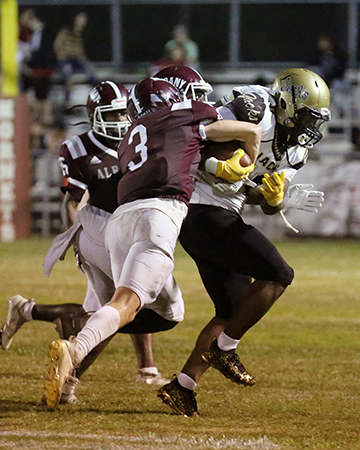 ALBANY — Bogalusa’s speed and athleticism, combined with Albany’s key injuries and inexperience, proved to be a bad combination for the Hornets.

Bogalusa broke the game open with 28 points in the second quarter on its way to a 43-0 victory over the Hornets to open District 8-3A play Thursday at Jessie Fletcher Memorial Stadium.

“Sometimes Jimmy and Joe don’t match up with Jimmy and Joe,” Albany coach David Knight said after his team dropped to 1-4 overall and 0-1 in league play. “They’re bigger, they’re faster, and they’re stronger, and even though we’re in the right place, we get run over. If we practice hard, and we hit on them at practice, then they’re beat up for the game, and if we don’t practice hard and we go in shorts, then they don’t know how to tackle in the game because they’re not used to getting hit. It’s Catch-22 right now.”

Bogalusa quarterback Ashton Levi went 11-for-16 for 241 yards and four touchdowns, while Tajdryn Forbes had four receptions for 121 yards and two touchdowns and Reynis Morris had four catches for 68 yards and a touchdown.

The Lumberjacks (3-2, 1-0) led 8-0 when Talik Williams, who had four carries for 65 yards, busted a 40-yard run to start Bogalusa’s last possession of the first quarter, moving the ball to the Hornet 25.

A personal foul against the Hornets moved the ball to the 11, and on the first play of the second quarter Levi scored on a 11-yard run on fourth down, helping push the lead to 15-0 while starting Bogalusa’s big quarter.

Albany picked up its first first down of the game on its ensuing drive but punted the ball away, setting Bogalusa up at its own 35, where Levi connected with Forbes on a perfectly thrown 65-yard touchdown pass on the next play from scrimmage. Williams had the two-point run, pushing the lead to 23-0 with 8:21 to go in the first half.

Meanwhile, Albany punted on its first five drives and finished the game with 105 yards of total offense, including 87 yards on 24 carries as a team.

“They were just stacking the box,” Albany linebacker/running back Austin Watts said. “They were out hustling our offensive line.”

Albany quarterback Aiden Casteel, starting his third straight game with senior J.J. Doherty out with a shoulder injury, went 5-for-14 for 18 yards and an interception while the Hornets had five first downs in the game.

“We tried to throw it tonight, and before the ball got to our quarterback’s hands in the shotgun, he was getting hit by defenders,” Knight said.

“Aiden’s only about 5-4,” Knight continued. “He’s not tall enough to see over. He’s not fast enough yet to run around, so we rely on being smart and throwing quick stuff, but Bogalusa’s so stinking fast, they can make up for mistakes. We had them two or three times in legit plays, but their speed just got there and killed us.”

After Albany’s fifth punt, the Lumberjacks went to work on another scoring drive. Levi hit Reynis Morris for seven yards on fourth-and-four from the Bogalusa 38, then the duo hooked up for a 53-yard gain to the Albany 2 on the next play.

The Lumberjacks, however, were hit with a personal foul, which backed the ball up to the Albany 17. On the next play, Levi connected with Morris again on a touchdown. The PAT was blocked, but Bogalusa led 29-0 with 4:39 to play in the first half.

The Hornets drove to the Bogalusa 37 on their next drive but turned the ball over on downs, setting the Lumberjacks up for their final score of the half.

“We watched every scenario, played every scenario in our mind, and practiced them this week, and as soon as we got in the game, it was like our guys forgot everything up front, and they would block one guy and let the other guy go,” Knight said. “We practiced that. We went over it. We showed it to them, but you just can’t simulate it in practice.”

On the first play of the drive, Levi passed to Morris, who flipped the ball to Forbes on a hook and ladder, but the Lumberjacks were backed up because of a personal foul. Levi then hit Forbes for 44 yards to the AHS 4, setting up Levi’s touchdown run on the final play of the first half, helping the Lumberjacks to a 36-0 lead.

“Things just started clicking so we took advantage of opportunities,” Bogalusa coach Cyril Crutchfield said about the second quarter. “One thing people don’t realize is that in order to score 28 points, the defense has to give you possessions. Defense played well all night. They had a lot of 3 and outs.

Crutchfield said the defensive performance was a group effort and added that Deijon Zeno, Keyshawn Manning and Michael Burton all played well.

Bogalusa scored the game’s final touchdown on its opening drive of the second half, capping a six play, 61-yard drive with a 22-yard touchdown pass from Levi to Forbes.

“Defensively, we stuck to one coverage, and nobody knew it,” Watts said. “We’ve been running it since the summer, and we had blown coverages all night.”

The teams traded punts, and Albany lost a pair of fumbles. Bogalusa turned the ball over on downs on both possessions following the turnovers by kneeling the ball, and Aiden Casteel threw an interception on Albany’s final possession, allowing Bogalusa to run out the clock.

The Lumberjacks got their first touchdown on a 10-yard pass from Levi to Aquanis Roberts after forcing an Albany punt on the opening drive of the game.