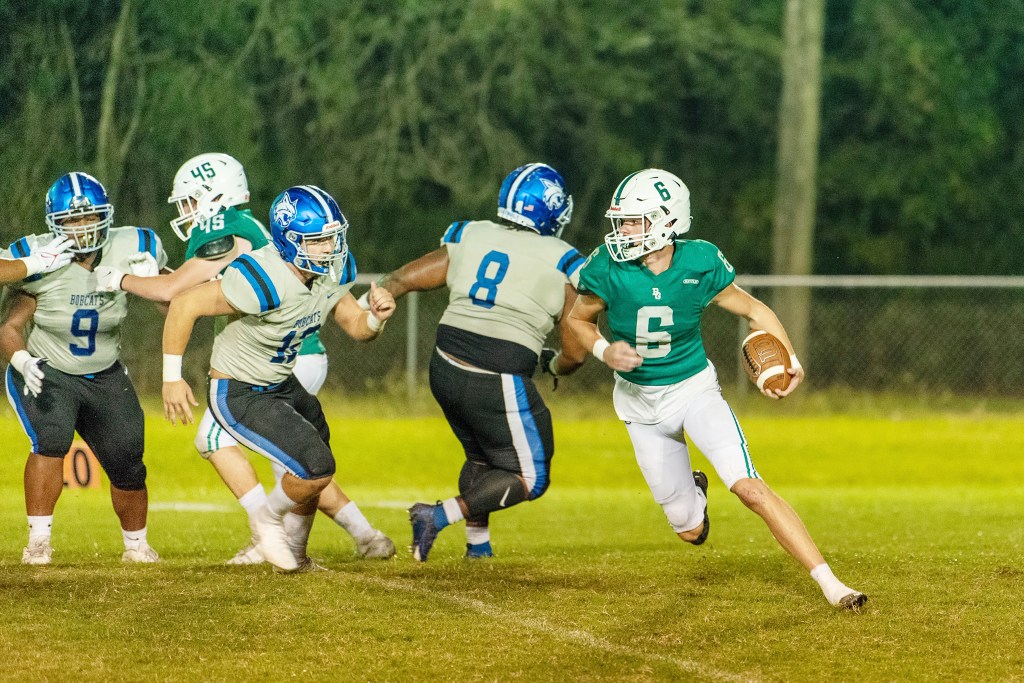 The Bobcats quickly took control of the game and put 31 points on the board in the first quarter. Five minutes in, Ian Randolph passed to Max Magee from Buccaneers’ 45-yard line for the first touchdown of the game. Luke Stanley failed his extra point kick, which put the score at 6-0.

Four minutes later, Randolph pitched back to Miles Harris, who ran it in from the 12-yard line. Randolph passed to Magee for the two-point conversion, which put the score at 14-0. A minute later, the Bobcats’ defense forced a safety when a host of Bobcats sacked Peyton Summerall in the Buccaneers’ own end zone and put the score at 16-0.

With two minutes left in the quarter, Randolph pitched back to Tate Little from the Buccaneers’ 18-yard line. Little ran it in up the right side for another touchdown. Stanley’s extra point kick was good and the score went to 23-0.

The Bobcats wrapped up the first quarter, with just seconds left on the clock, with a handoff from Randolph to Briggs Sumrall from the 17-yard line. The extra point was good and the score at the end of the first quarter was 31-0.

The second quarter fared much the same. Two and a half minutes in, Randolph handed off to Webb Chain at the 6-yard line. Chain forced it up through the center for the touchdown. Stanley’s extra point kick was good and the score went to 38-0. With three and a half minutes left in the quarter, Randolph handed off to Josh Buckhalter, who carried it in from the 15-yard line. The extra point was good and the score went to 45-0 at halftime.

The second quarter saw the Buccaneers’ defense play better. The Bobcats made a single touchdown at the end of the third quarter on a pass from Cody Bickford to Quin Sirmon. The extra point attempt failed and the score went to 51-0.

In the fourth quarter, Bowling Green quarterback Nathan Jenkins ran in a touchdown on a quarterback keeper from the 38-yard line to put the Buccaneers on the board. The extra point attempt failed and the final score of the game was 51-6.