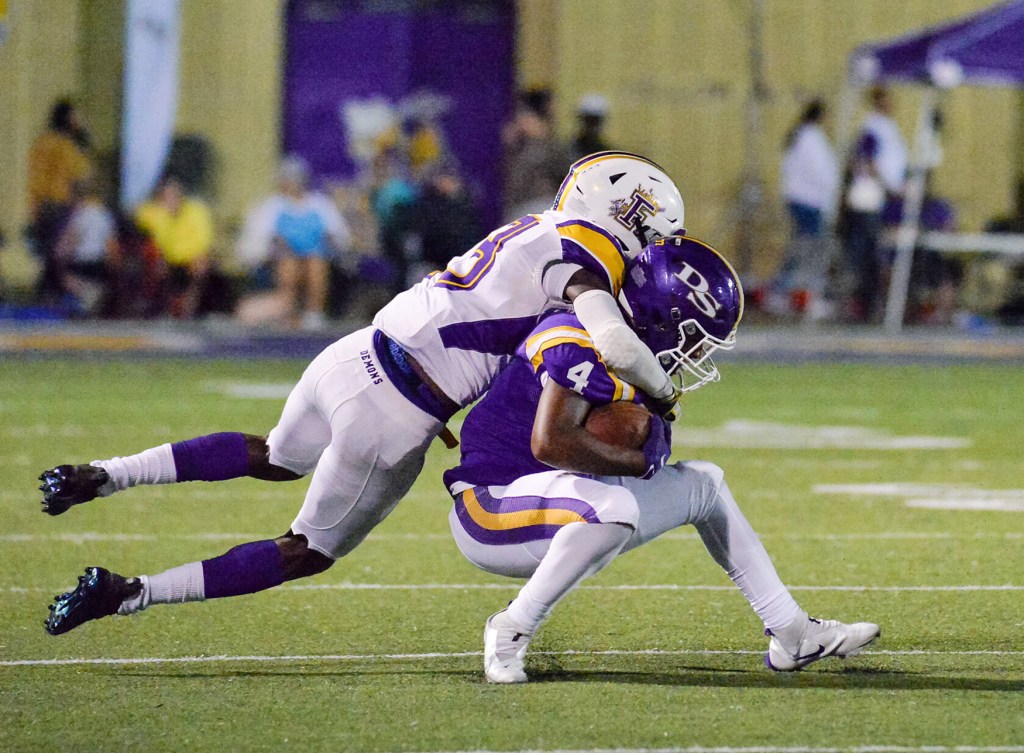 Brian Smith’s guys did him proud.

The Yellow Jackets got solid rushing efforts from Ray McKneely and Cam Kelly, picked up some key defensive stops and overcame some adversity, losing starting quarterback Reese Mooney to what coach Brett Beard said was a broken ankle on the Yellow Jackets’ second series of the game.

It all culminated in a 33-23 win over Franklinton at Yellow Jacket Stadium on Friday in Denham Springs’ first game since Smith, the team’s defensive coordinator, died earlier this week after battling colon cancer.

Beard praised his team’s effort, especially under the circumstances this past week.

“Any time you get a ‘W’ and you get the job done, he’s (Smith) smiling, we’re smiling and couldn’t be more proud of the resiliency of these kids to go what they’ve been through, and then you get out here and you lose a couple of key offensive pieces early on,” Beard said after his team moved to 2-1. “I told our kids coming out, ‘y’all are some tough dudes. You got this. You can handle it. Go take advantage of your moment and your time and go do the job and enjoy it.’ Our kids can handle it. They’re a lot of fun to be with, a lot of fun to watch them grow up. That’s what we did tonight. We grew up.”

“We didn’t finish as strong as we would have liked, but we finished and got the win,” Beard said after DSHS was shut out in the second half. “That’s a huge step in the right direction.”

Maybe the Yellow Jackets’ biggest drive of the night came after DSHS went up 26-3 on a safety after a high snap on a Franklinton punt attempt went out of the end zone.

Denham Springs took over at the Demon 43 after the free kick, but McKneely lost a fumble on the first play, which Khaled Waliagha returned 43 yards for a touchdown, cutting the lead to 26-10 with 2:19 to play before halftime.

The Yellow Jackets took over at their own 15, but a pair of penalties backed them up to their own 4. McKneely busted off consecutive runs of 34 yards to get DSHS to the Demon 28.

“We actually ran the same play twice,” McKneely said. “… The hole kept opening up, and I hit it as hard as I can, and I knew I had to get out of bounds and stop the clock so we had a chance to score.”

Four plays later, Kelly broke a 12-yard run to the Demon 1, setting up Ryder Wygant’s keeper on the next play for the touchdown, with Hood’s PAT making the score 33-10 with 17 seconds to play before halftime.

“We got off to another slow start,” Franklinton coach Jonathan Barber said. “They were big and physical up front and they gave us some different stuff offensively early on. We finally adjusted about half way through the second quarter, and I thought we played really well after that. We played hard throughout, but made a few too many mistakes to win the game. When you play a good football team you have to make them beat you and not beat yourself. We played well enough to win the game, but in critical spots we made too many mistakes. We are improving tremendously, and will continue to do so, but we have to get our mistakes cleaned up so that we can execute at a high level.”

McKneely’s big night got started early as he carried five times for 37 yards on a 64-yard scoring drive to open the game, capped by his 10-yard touchdown run and Noah Hood’s PAT for a 7-0 lead with 8:55 to play in the first quarter.

Franklinton’s Kelly Daniels returned the ensuing kickoff to the DSHS 23, and the Demons got a 20-yard pass from Zion Anders to Keyon Nelson on fourth and 18 to keep the drive going. It ended on Cole Colletti’s 27-yard field goal to cut the lead to 7-3 with 5:32 to play in the first quarter.

The Yellow Jackets started their next drive at their own 8 after a block in the back call on the kickoff but picked up first downs on five of the first six plays of the possession, with McKneely’s 20-yard run moving the ball to the Demon 16.

On the next play, Mooney kept the ball and slid awkwardly. He stayed down after the play before limping off the field and was replaced by Wygant before the drive ended on Hood’s 29-yard field goal for a 10-3 lead with 1:25 left in the first quarter.

DSHS forced a punt and took over at midfield, and Wygant scrambled for 12 yards to the Demon 39. Two plays later, Kelly broke loose over the left side on a 25-yard touchdown run, and Hood’s PAT pushed the lead to 17-3 with 10:15 to play in the first half.

Kelly finished with 107 yards on 16 carries.

“Those are two guys that we’ve been kind of hammering things out, making some decisions,” Beard said of Kelly and McKneely. “We’ve got to get them going because you see what kind of players they are. We’ve got to get them in a groove and get them comfortable and I thought we did a good job of that early on …”

Franklinton drove to the DSHS 35, but the drive came up empty when Gus Cisneros broke up a pass on fourth down.

That set up the Yellow Jackets’ next scoring drive, with McKneely carrying four times for 49 yards to set up his 15-yard TD run over the left side, giving DSHS a 24-3 lead with 5:06 to play in the first half.

“Ryder, he’s more of an option quarterback,” McKneely said. “He can throw it too, but when Reese went out, I had the confidence in him that I knew he was going to step up.”

The teams traded punts before the safety started the scoring run before halftime.

Franklinton scored on its first drive of the second half after starting at its own five.

Denham’s Jabarry Fortenberry returned an interception for a touchdown on third down, but the play was wiped out when DSHS was flagged for pass interference and a personal foul.

“We’ve got to get off the field on third and long,” Beard said. “We’re still struggling with that. There are just some things we’ve got to continue to work through and situations that we’ve got to hone in on and be better at our job and knowing what we have in front of us and having an idea of what we’re going to see just so we’re prepared to combat it. That’s all part of growth and part of learning and part of competing. We’re learning. This process is always learning, and these kids are always learning. We’re getting better.”

Three plays later, Timarion Partman intercepted Wygant, setting up a 17-yard TD pass from Anders to Partman, cutting the lead to 33-23. The drive was aided by a personal foul and a pass interference call against the Yellow Jackets.

Later, Franklinton turned the ball over on downs after recovering a muffed punt at midfield.

“Hat’s off to Franklinton,” Beard said. “I thought they did a great job of making some second half adjustments and kind of taking away some things that we did in the first half and made us one dimensional, which when you go in with a backup quarterback in that situation, there’s some things that we’re going to have to work on this week to get us ready to go.”

The teams traded punts before Maison Vorise broke up a pass on fourth down, allowing DSHS to take over at its own 47 with 2:52 left to run out the clock.

“It feels good,” McKneely said of the win on Friday. “It feels good, but we can’t stop here. This team has been through so much, we’ve just got to lock in for next week and focus on this week tomorrow. We’re going to enjoy this one tonight and focus tomorrow on Tara.”

Franklinton’s Zion Anders threw for 80 yards and a touchdown. He also ran for 78 yards and a score.

Glen Mark caught a pass for 12 yards and a touchdown.

Micah Hart made a catch for 43 yards.

Keyon Nelson caught a pass for 20 yards. He also ran for 42 yards.

Kendarius Brumfield recorded one catch for 20 yards. Defensively, he made eight stops with seven of those solos.

Billy Gross led the defense in tackles with 12 to go with 10 solos and two sacks.

Waliagha tallied six tackles along with the fumble return for a touchdown.

Senqualon Conerly had eight stops and a forced fumble.

Andre Callais made seven tackles with five of them solos.

Partman had three stops with a sack and the interception.

Elijah Tate made a solo stop and a fumble recovery.

Franklinton is 1-3 this season. The Demons’ next game will take place on Friday at home against Belle Chasse.

“This week we have Belle Chasse,” Barber said. They are a team that is usually in the 4A playoffs so it’s a good opportunity to see how we measure up to a team in our class.”

Belle Chasse enters the week with a 1-1 mark after a 14-6 loss to Salmen last week.

The teams have met in the two years prior and have split the two games with Belle Chasse winning last year, 35-7, and Franklinton capturing the 2019 contest, 23-17.

This article was written by Rob DeArmond of the Livingston Parish News. The Daily News’ Chris Kinkaid also contributed to this story.