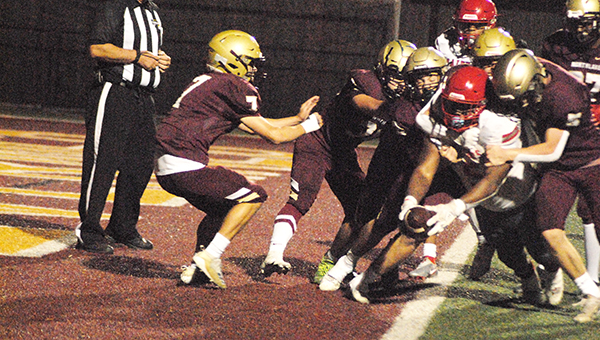 Pine’s Adrianeun Johnson reaches the ball over the goal line for a touchdown in the Raiders’ 31-17 road win.

COVINGTON — Pine trailed 14-7 at halftime, but came back to capture a 31-17 win over Northlake Christian School in Friday night’s road game.

Adrianeun Johnson had a great night, unofficially running for 243 yards. He scored four touchdowns, with most of those yards and three of his touchdowns coming in the second half.

“First half, I was going pretty slow. Then I had to get my team motivated because once my defense had my back, I had to do my job and my job is to score for them and give them a break,” Johnson said. “(The running) wouldn’t be like that if it wasn’t for my team, my line, my whole offense, (Pine head) coach Bradley (Seal) and all of them. I was just doing my job as I was supposed to.”

“Getting to 3-1 going into the bye week is huge,” Seal said. “We have a young team and playing these close games is growing us up, so I’m proud of our team the way we played the second half. It’s nice (winning his 100th game coached), and that’s good, but it’s about these players and getting a win for them.”

Pine scored the game’s first points when Johnson ran in from the 1. Austin Warren’s extra point was good to give Pine a 7-0 lead with 3:05 left in the first quarter.

But Northlake Christian tied the game on the next drive when Gavin Krone took it in from the 2. Chase Mizell was good on the extra point for a 7-7 game with 11:03 to go in the second quarter.

After a Pine punt, Northlake Christian got the ball back with 8:42 to go and went on a 14-play, 68-yard drive that took 6:59 off the clock. Northlake Christian scored on Krone’s second touchdown of the game on a 1-yard run to give the Wolverines a 14-7 lead after Mizell’s extra point.

It stayed that way until halftime.

Facing first-and-goal from the 8, Johnson powered his way in, trimming the deficit to 14-13. The extra point snap was low, but holder Luke Spears alertly took the ball, ran right and got in the end zone for two, giving Pine a 15-14 lead with 6:41 left in the third quarter.

Johnson found the endzone again nearly four minutes later when he broke loose on a 31-yard run at the 2:44 mark to make it 21-14 after the extra point was blocked.

Mizell hit a 31-yard field goal with 9:17 to go in the fourth quarter to make it a four-point game, but Pine countered with a three-play, 65-yard drive that ended with a 34-yard run by Johnson. The extra point by Warren was good and it was 28-17.

Northlake Christian fumbled the ensuing kickoff. Brandon Sprehe recovered for Pine and the Raiders ran out the clock on the way to a 31-17 win.

Pine (3-1) has a bye on Friday and will return to action on Oct. 8 when the Raiders host St. Helena College and Career Academy.

Northlake Christian School (0-3) will play again on Thursday at Independence.