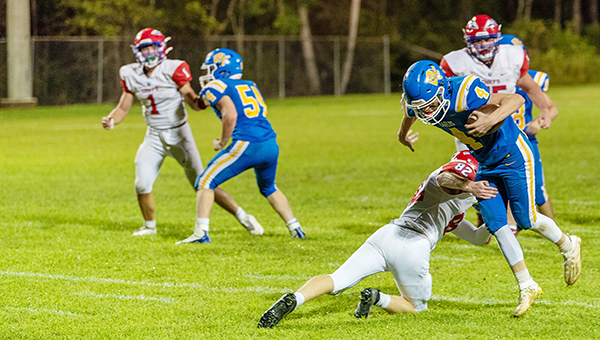 The Ben’s Ford Christian Academy Eagles hosted the Tensas Academy Chiefs on Friday night in their sixth game of the season. Ben’s Ford went into the game with a 1-4 season record off a loss to Porter Chapel Academy the previous week. Tensas Academy’s record was 1-3 prior to the game.

Ben’s Ford fell at home Friday night, losing by the score of 36-19.

The Chiefs took quick control in the first quarter with two unanswered touchdowns. The first touchdown was a quarterback keeper by Chip Tucker from the Eagles’ 19 yard line. The Chiefs successfully made the two-point conversion and set the score at 8-0.

The second touchdown was a pass from Tucker to Jordon Matthews from the Eagles’ 33 yard line. Tucker kept the ball for the successful two-point conversion and the score went to 16-0 at the end of the first quarter.

The second quarter saw the Chiefs put two more touchdowns on the board. Tucker Rena scored the Chiefs’ third touchdown from the Eagles’ 42 yard line. The two-point conversion attempt failed and the score went to 22-0.

The Eagles rallied for a seven-play drive which ended in a successful field goal kick from the 13 yard line, making the score 22-3. With seconds left in the half, Tucker ran a quarterback keeper for his third touchdown of the game. Tucker then ran for the conversion and the score at halftime was 30-3 in favor of the visitors.

Opening the second half, The Chiefs’ put in a six-play drive ending in their final touchdown of the game. Tucker exercised the quarterback keeper and ran it in from the Ben’s Ford. The conversion attempt failed and the score went to 36-3.

Halfway through the third quarter and back in possession, Ben’s Ford’s Ein Knight passed to Alex Stogner from the 3 for the Eagles’ first touchdown of the game. Knight passed to Gage Adams, who rushed in for the conversion and moved the score to 36-11.

Kicking off the fourth quarter, Ben’s Ford put the last points on the board with a pass from Knight to Adams from their own 38-yard-line for a long touchdown. Adams ran in the conversion and the final score went to 36-19.