Lumberjacks come up short at Salmen 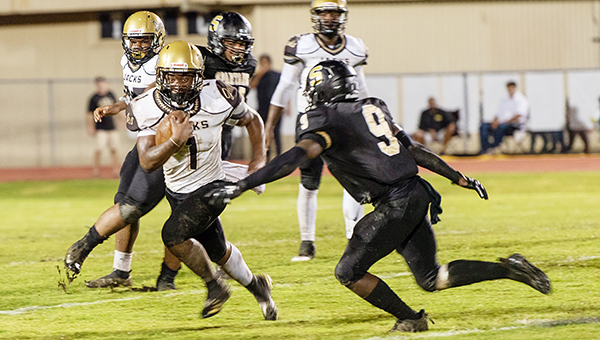 Bogalusa’s Talik Williams tries to elude a defender in Friday night’s game at Slidell. (Photo by John Glover for The Daily News)

SLIDELL — The Bogalusa High Lumberjacks traveled to Slidell to face the Salmen High School Spartans on Friday night, falling by a score of 26-6.

It was the third game in the season for the Lumberjacks, who came in with a 2-0 record. It was the second game for the Spartans, who were coming off a loss to Northshore the previous week.

The Spartans came out fighting in the first half with three touchdowns — two unanswered. Just a minute into the game, the Lumberjacks fumbled a punt, which was recovered at the Bogalusa 4. On the next play, Salmen quarterback Jack Gillikin handed off to Trent Johnson, who ran it in for the touchdown. Tristen Pugmire missed the extra point kick and the score was 6-0.

Later in the first quarter, with the Spartans back in position, Gillikin passed to Jayden Hardison from the Bogalusa 20. Hardison caught the pass for the second touchdown of the game. Pugmire made his kick and put the score at 13-0 for the remainder of the first quarter.

With three minutes left in the first half, Bogalusa quarterback Ashton Levi passed to Rynis Morris from the 40-yard-line. Morris ran it back to the 2. Levi ran it in with a quarterback keeper on the next play for the Lumberjacks’ touchdown. The extra point was no good, and the score was 13-6.

The Spartans answered back with a six-play drive of their own. Gillikin passed to Johnson with 3 seconds left in the half for Salmen’s third touchdown. Pugmire’s kick was good and the score at halftime was 20-6.

The second half saw the Spartans put one more touchdown on the board. Levi attempted a pass, which was intercepted by Hardison at the Bogalusa 15 and returned for the touchdown. Pugmire made the extra point and the final score of the game was 26-6.

The Lumberjacks will play Lakeshore High in Mandeville on Friday.