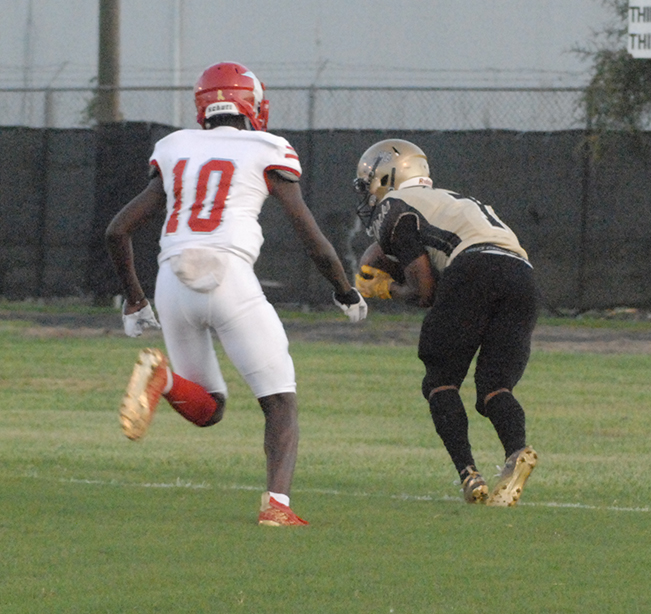 Bogalusa's Tajdryn Forbes catches a touchdown pass from Ashton Levi to put the Lumberjacks on the board in Friday's game against Pine.

Bogalusa’s Ashton Levi and Tajdryn Forbes connected on the Lumberjacks first two touchdowns as Bogalusa scored the game’s opening 21 points in a 42-28 victory over Pine to start the home schedule Friday night.
Bogalusa (2-0) received the opening kickoff and drove 67 yards in six plays before Levi and Forbes hooked up on a 19-yard pass. Erin Zeno made the extra point to give his team a 7-0 lead with 10:31 left in the first quarter.
Levi threw three touchdowns and ran for another.
“He’s going to make some mistakes, but he’s made a lot more positive plays than negative plays, so what we’re trying to do is eliminate some of the negatives and increase the positives,” Bogalusa coach Cyril Crutchfield said. “But one thing about him, he has a lot of poise. He might make some errors, but in the end, when we need him to make a play, he’s going to make it, so that’s one thing I like about him.”
After Pine turned the ball over on downs, Bogalusa needed one play to go 75 yards. Levi threw a short pass to Forbes. Forbes got past several defenders and went the distance to make it 14-0 after Zeno’s extra point with 6:57 on the clock.
Bogalusa’s Ayden Magee recovered the kickoff at the 50 and that led to a Talik Williams 1-yard run for a 21-0 lead with Zeno making the extra point with 5:04 left. The big play came when Levi completed a 35-yard pass to Aquinas Roberts that brought the ball to the 1.
Pine (1-1) got on the board on the ensuing drive. The Raiders went 60 yards and tallied when Adrianeun Johnson scored from the 9. Austin Warren hit the extra point, trimming the lead to 21-7 with 1:47 left. It was Johnson’s first of four touchdowns.
It stayed that way until the 4:06 mark of the second quarter when Levi ran 7 yards to paydirt. Zeno was good on the extra point and it was 28-7 at halftime.
Pine came back in the third quarter and at the beginning of the fourth quarter and did a good job of controlling the ball.
The Raiders limited the Lumberjacks to just one possession — a three-and-out in the third quarter— while scoring 14 unanswered points to begin the second half.
Pine took the second-half kickoff 69 yards in 10 plays that used up 5:40 of the clock and tallied when Johnson found the end zone from 16-yards out after getting through defenders. Warren made the extra point for a 28-14 game with 6:20 left.
After Bogalusa punted, Pine went 82 yards in 13 plays, capped off by Johnson tallying from the 14. Warren hit the extra point, trimming the lead to 28-21 with 11:40 left in the fourth quarter.
Pine coach Bradley Seal talked about his team coming back.
“We got down early, we didn’t fight. To me, big plays early and that’s what we’ve talked about the last couple of weeks. We’re just giving up the big play on offense, and once we stopped that, we were able to compete with them. Just spotted them 21 points. You can’t do that against a good team.”
After Pine got within seven, it was back-and-forth.
Williams came up big for Bogalusa on the next drive. Bogalusa took over at the 41 and WIlliams ran off 59 yards in two plays. The first went for 31 yards, bringing the ball to Pine’s 28. The next was a 28-yard run for the touchdown. A snap past the holder kept the extra point from being attempted and Bogalusa had a 34-21 lead with 11:18 left in the fourth quarter.
But Pine responded with a 60-yard touchdown drive that ended when Johnson hit paydirt from the 3. Warren’s extra point was good and the Raiders were within six at the 8:45 mark.
The Lumberjacks continued to make big plays, and again, it was Williams. He caught a 12-yard touchdown pass from Levi on fourth-and-goal. Levi ran in for two to make it 42-28.
Pine drove to Bogalusa’s 32, but turned the ball over on downs with 1:56 left and Bogalusa ran out the clock for the 42-28 win.
Both teams are back in action on the road Friday.
Bogalusa heads to Salmen, while Pine goes to Pearl River.