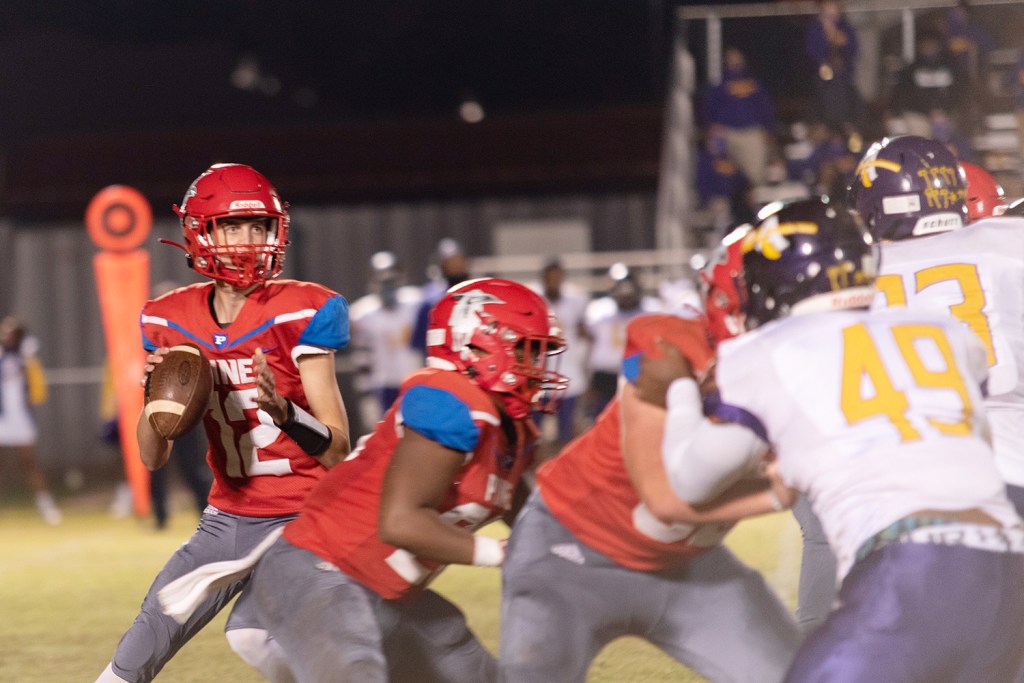 Pine’s Luke Spears threw three touchdowns and Adrianuen Johnson had a solid game on the ground, helping the Raiders to a 35-22 win over Varnado in the first game of the season at home Saturday.

Johnson ran for 155 yards on 17 carries and a touchdown.

James Owens made two catches for 75 yards and two touchdowns.

D.J. Garrett had one touchdown catch.

Defensively, Kemontre Magee and Tyler Monk both had an interception.

“I was happy with the overall play of the team,” Pine coach Bradley Seal said. “Outside of a couple big plays our defense played well. Offensively we were able to run the football. Luke had a good game. No mistakes, three touchdowns and no interceptions.”

Varnado’s Malik Patterson had touchdown runs of 68 and 85 yards in the second quarter. Zamoriyon Washington recorded a two-point conversion on the second touchdown.

Quovadis Bickham II caught a 67-yard touchdown pass from Jamarian Lewis in the fourth quarter and Tyler Whitfield made the two-point conversion.

“I felt like our kids played hard. We just ran out of gas in the second half due to our numbers,” Varnado coach Adam Brumfield said. “They made two crucial plays in the third quarter that cost us the game. We got stopped on a fourth-and-3 where we came up a couple inches short. Then they got the ball and went on to convert a fourth down by just a couple inches and continued on to score. That’s football sometimes. It’s a game of inches and those few inches made a two-score difference. Also we threw an interception on the following series in the third quarter which was my fault on a bad call and their kid made a good play.”

This is the first of two games between the two teams. They will play again in the final regular season game on Nov. 5. That will be a District 9-2A contest. Saturday’s game was in non-district play.

Pine is back in action on Friday when the Raiders play against Bogalusa at BHS.

The Lumberjacks come off of a week one win over Franklinton, 48-42, on Friday.

Tajdryn Forbes caught 10 passes for 159 yards and a touchdown.

Desmond Ramirez had one catch for 14 yards and a touchdown.

Talik Williams caught a pass for 52 yards and a touchdown, while running for 15.

Tayln Williams ran for three yards and a touchdown.

Varnado is back in action on Friday with a road game against Slaughter Community Charter.

This is the opener for Slaughter Community Charter.