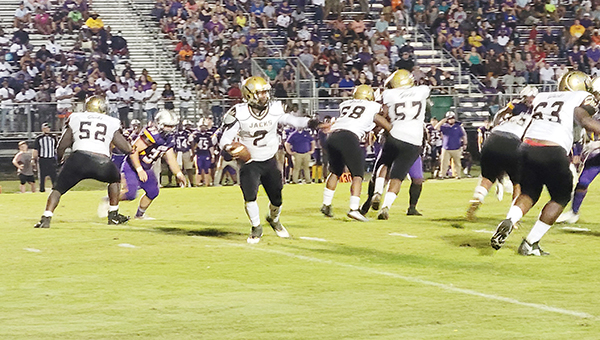 The battle for the Pine Burr Trophy went down to the wire, as Bogalusa held on to a hard-fought 48-42 victory.

Franklinton led 42-40 late in the fourth quarter and drove to Bogalusa’s 6, but were backed up to the 40 and had to punt.

The kick went into the end zone with 2:02 left.

Bogalusa then drove 80 yards in four plays, and with second-and-6 from the 50, Ashton Levi completed a pass to Talik Williams. Williams took it up the right sideline for the winning points. Levi ran in for the two-point conversation for a 48-42 lead with 1:17 left.

The Lumberjacks defense kept Franklinton off the board, capped off by Tajdryn Forbes’ interception with three seconds left to seal the 48-42 win.

It was the third-straight year that Bogalusa has won the Pine Burr Trophy.

Bogalusa’s Xavier Adams made two big plays — one on special teams and another on defense.

Adams recovered a muffed punt that led to the game’s first touchdown and he ran back a snap that got past the quarterback for a score.

His muffed punt recovery gave the Lumberjacks a first down at the Demons’ 35.

Three plays later, Tajdryn Forbes scored from the 7 to put Bogalusa up 6-0 after the missed extra point with 10:06 left in the first quarter.

Franklinton went in front later in the period when Keyon Nelson ran 37 yards.

Cole Colletti added the extra point to make it 7-6 with 4:06 left in the first.

Bogalusa scored the next 22 points. Ashton Levi ran 17 yards with 55 seconds to go in the first for a 12-7 lead after the two-point conversion was no good.

Then, Bogalusa made another big play on special teams. The snap was over the punter’s head. He rolled out and punted on the run. Bogalusa’s Ayden Magee caught the punt at Franklinton’s 21 and ran up the left sideline for the score. Levi connected with Aquinas Roberts for two points and a 20-7 lead just 25 seconds into the second quarter.

Less than a minute later, Adams recovered a snap past the quarterback and returned it about 45 yards to the endzone. Levi ran for two and the Lumberjacks were up 28-7 with 10:36 left in the half.

Franklinton came back despite the 21-point deficit, putting up the next 14 points in the game.

Zion Anders ran in from 7 and threw a touchdown pass to Glen Mark. Colletti hit both extra points and it was 28-21 with 31 seconds left, but that was just enough time left for Bogalusa to get back on the board.

The Lumberjacks drove to the 14. Levi threw a pass to end zone. A player from each team went for the pass. The ball was deflected and Desmond Ramirez caught it for the Bogalusa touchdown with no time left. The two-point conversation was no good and Bogalusa led 34-21 at halftime.

Franklinton opened the scoring in the second half when Anders converted a fourth-and-1 by running 35 yards for a touchdown. Colletti made the extra point and it was 34-28 with 6:35 on the third quarter clock.

Franklinton then went in front when Billy Gross recovered a Bogalusa fumble in the end zone for a touchdown. Colletti’s extra point was good, and with 6:11 to go in the third quarter, Franklinton had the lead at 35-34 — its first lead since the score was 7-6.

From there, it was back and forth.

Bogalusa went back in front with 50 seconds left in the third on Talyn Williams’ 2-yard run. The two-point conversation was no good, keeping Bogalusa ahead 40-35.

Franklinton went up 42-40 when Anders ran 23 yards and Colletti made the extra point to make it 42-40 Franklinton at the 7:56 mark of the fourth quarter.

It stayed that way until Bogalusa scored the winning points with 1:17 left.

Bogalusa will be back in action on Friday as the Lumberjacks host Pine, while Franklinton is scheduled to play Covington at Southeastern Louisiana University on Friday.