Officials: Hurricane Ida is on the way 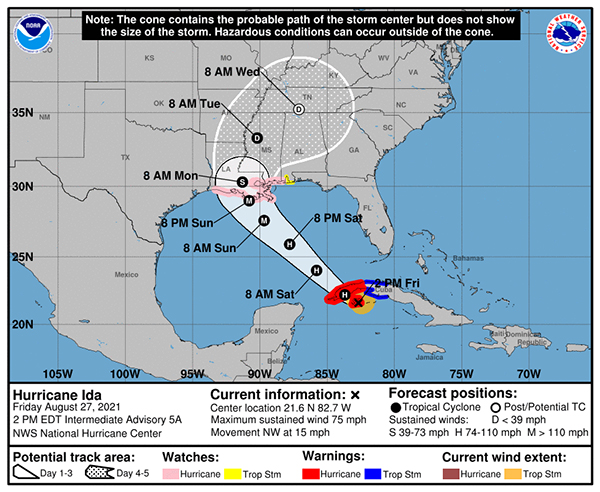 Officials said Friday afternoon that Hurricane Ida will likely make landfall sometime Sunday, and could have an impact in Washington Parish and the surrounding area.

As of 1 p.m. Friday, the National Weather Service had announced a hurricane watch for Washington Parish, as well as northern Tangipahoa Parish. There was also a storm surge watch in effect for St. Tammany and Tangipahoa parishes.

At the time, Hurricane Ida was forecast to move into the Gulf of Mexico and intensify as it crossed the Gulf on Saturday. It was expected to make landfall as a major hurricane on the northern Gulf Coast on Sunday, and was projected to possibly bring life-threatening storm surge flooding, damaging winds and flash flooding to portions of southeast Louisiana and southwest and coastal Mississippi.

NWS officials said that conditions were expected to “deteriorate” over Saturday into Sunday, and recommended that all residents take the time Saturday to prepare for the storm. If local officials are forced to order an evacuation, it must be followed, NWS officials said.

The most recent forecast suggested tropical storm force winds of 20 to 30 mph with gusts up to 40 mph, but cautioned that wind as strong as 58 to 73 mph is possible. The expected rainfall is eight to 12 inches, with higher amounts in some locations.

In addition, the NWS suggested that the weekend weather could result in the formation of tornadoes.

By Friday afternoon, Bogalusa City Schools, Bowling Green School, Northshore Charter School and Northshore Technical Community College had all canceled classes Monday. In addition, the 22nd Judicial District Court for the parishes of Washington and St. Tammany, as well as the Washington Parish Clerk of Court’s Office, will be closed Monday.

Officials urged citizens to ensure they have a plan in place, and to follow official sources for the latest updates on the storm. The Daily News website (www.bogalusadailynews.com) will post updates, as they become available.

The detailed NWS forecast for the Bogalusa area was as follows, as of 1 p.m. Friday: