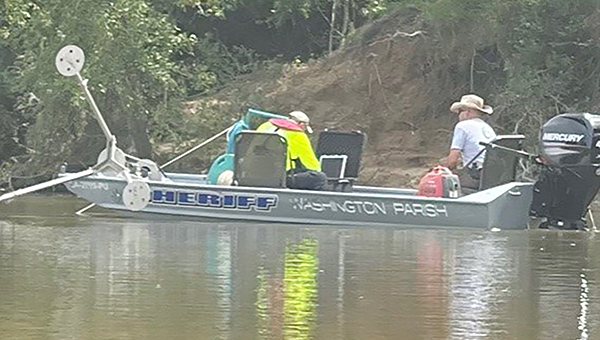 Washington Parish Sheriff's Office deputies and other law enforcement officials take part in a recent search for a drowning victim.

The Washington Parish Sheriff’s Office recently participated in the search for two men who drowned in the Bogue Chitto River in separate incidents, according to WPSO Chief Criminal Deputy Mike Haley.

Haley said that the first incident occurred Sunday, Aug. 1, in the river near the state park off Louisiana Highway 25 south of Franklinton. A young man who was from Jefferson Parish drowned while the family was visiting the state park and swimming in the river. After a three-day search, his body was recovered downstream from the park, Haley said.

On Monday, Aug. 9, a young male resident of Livingston Parish drowned near the Louisiana Highway 437 bridge while on a tubing trip with friends, Haley said. His body was recovered the same day. Three other persons in the tubing group who could not swim were rescued by deputies who arrived on the scene shortly after the drowning was reported, Haley said.

During the searches for the two men, WPSO deputies were assisted by personnel from Southeast Louisiana Underwater Search and Recovery in Slidell, which utilizes sonar to help locate drowning victims. In both cases, the drowning victims were unable to swim, according to Haley.

Haley said that the names of both victims are being withheld, in deference to their families.

“I cannot over-emphasize how dangerous the river can be,” Washington Parish Sheriff Randy Seal said. “Anyone venturing in or on the river should be able to swim and always wear a life jacket, even if floating on a tube or riding in a boat. My heartfelt condolences go out to families of both of these young men.

“I am grateful to our officers for the many hours spent on the river in recovery efforts, and to the Southeast Louisiana Underwater Search and Recovery team for their valued assistance.”