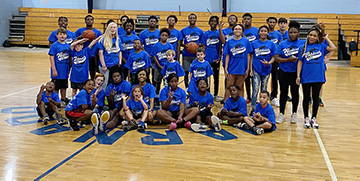 “The camp was pretty successful,” Varnado coach D.W. Trosclair said. “We still didn’t know if kids were going to come out because there’s still COVID out there, but all-and-all, parents came out and saw that it was a safe environment and me and my staff tried to make sure there was a safe environment.”

The camp had precautions like hand washing breaks and basketballs were sanitized everyday.

The clinic, which had about 40 children from kindergarten through eighth grade, started off by teaching the participants offensive and shooting skills on the first day with dribbling, defensive and passing skills the next. On the final day, they put the skills to use and Trosclair said that once the campers saw the skills come into play, they were amazed.

For the competition, the kindergarteners through fifth grade had a free-throw shootout, while the older children competed in a 3-point shootout.

They also competed in a game called knockout.

“The kids really have fun playing that game,” Trosclair said.

Knockout is a game where players line up starting at the free-throw line and go back toward halfcourt. First two players have a basketball each. The first person shoots, if they make it, they pass the ball to the next person in line. If they miss, they must make a shot before the person behind them does. If the person behind them makes a shot before they do, they are out of the game. The contest goes on until there is one player left and they are the winner.

“The best feeling I had from the camp is that the kids didn’t want to leave,” Trosclair said. “We had a pretty bad rainstorm that week and the kids still came out.”

Trosclair said he was happy the high schoolers assisted with the camp.

“They had fun sharing their skills with the little kids,” Trosclair said.