FHS’s McKenzie is the District 9-4A MVP 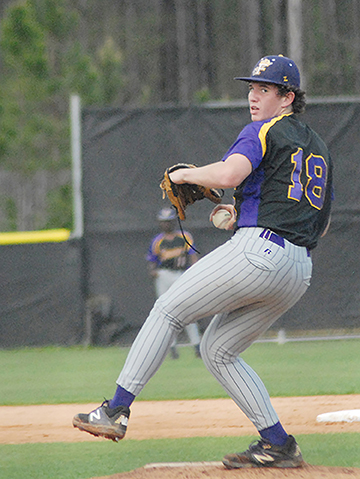 DAILY NEWS PHOTO/Chris Kinkaid Franklinton’s Jordan McKenzie prepares to release a pitch in a game this season. McKenzie is the District 9-4A Most Valuable Player.

Franklinton’s Jordan McKenzie is the District 9-4A Most Valuable Player.

McKenzie, who made the top all-district team as an infielder, batted .429, slugged .500 and reached base at a .467 clip in league play. McKenzie doubled twice, drove in five runs and scored seven runs. McKenzie did not strike out in his 30 plate appearances.

At the plate, Turner posted a .320 batting average and .320 slugging with an on base percentage of .433. Turner scored three runs and drove in six. Turner did not strike out in his 30 plate appearances.

Isaac Wascom posted a .348 batting average and .348 on base percentage with a .375 slugging. Wascom drove in a run and scored a run in district play.

Warren posted a .353 batting average with a .471 on base and .586 slugging. Warren doubled twice, scored nine runs and drove in five runs.

Penton tallied a .355 batting average with a .452 on base and .394 slugging. Penton doubled three times, scored 10 runs and drove in four.

Micah Wascom posted a .474 batting average, a .684 slugging percentage and a .655 on base percentage. Wascom doubled four times, scored eight runs and recorded a run batted in. Wascom did not strike out in 30 plate appearances.

Penton had a .333 on base percentage. He scored seven runs and posted four RBIs.

Burkhalter scored a run and drove in three runs in district play.

This season, Franklinton captured the district title with a 6-2 record.

Franklinton was the sixth seeded team in the playoffs and reached the quarterfinals before being defeated by third-seeded and state champion North Vermilion in two games during a best-of-three, 8-1 and 15-7.