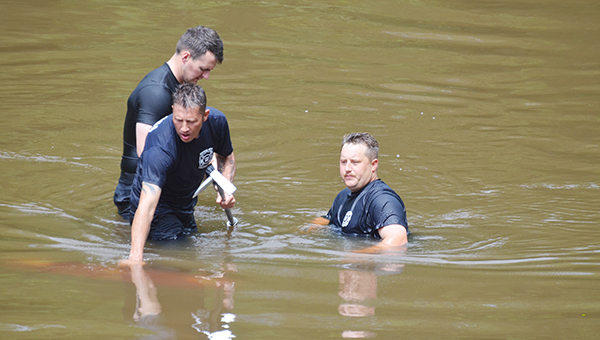 First responders search through the water of Bogue Lusa Creek, to be sure there are no other people inside a car that had submerged Monday afternoon. The car’s only occupant, the female driver, was rescued and transported to the hospital.

First responders rescued a woman from the Bogue Lusa Creek on Monday afternoon, after she apparently drove her car into the water.

According to Bogalusa Police Department officials, agencies responded at a 2:25 p.m. emergency call on the bridge on Louisiana Highway 21, between East Second Street and Anthony J. Fiorenza Drive/Bogalusa Cemetery Road, in reference to a vehicle that had gone into the creek. The responding agencies included the BPD, Bogalusa Fire Department, and Northshore EMS.

Upon arrival, a woman was observed standing on top of her car and screaming for help, officials said. Officers noticed that the vehicle was fully submerged and slowly going downstream.

BPD Officer Brandon McBride, along with A/Capt. Taylor Williams and A/Driver Dustin Stringer of the Bogalusa Fire Department, entered the creek and performed a water rescue of the woman, who was not immediately identified. She was turned over to Northshore EMS and then transported to the emergency room of Our Lady of the Angels Hospital for treatment.

The officers then searched the submerged vehicle for any other occupants, but found none. They remained in the creek water and assisted Carroll’s Wrecking Service in retrieving the vehicle from the water to ensure nobody else was inside.

In a post on the City of Bogalusa’s Facebook page, a BPD official stated “numerous other officers, firemen and emergency personnel assisted, but the actions of these three were above and beyond their everyday duties.”

Traffic was temporarily blocked and slowed down along the bridge as the rescue took place during a light rain shower.

The cause of the crash is still under investigation.