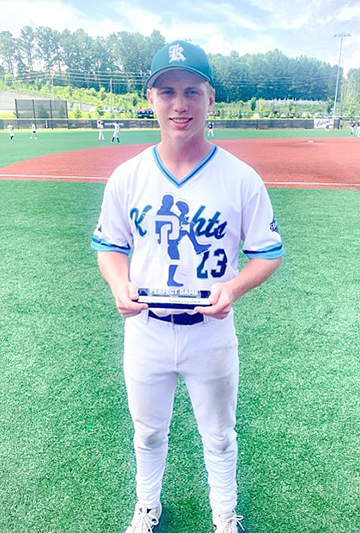 Franklinton’s Micah Wascom won the MVP Pitcher in the Perfect Game 15U National Elite Tournament that took place in Hoover, Ala. from July 4 to July 8.

Wascom threw 8-2/3 innings, allowing no earned runs on five hits with 12 strikeouts and a walk. His fastball topped out at 88 miles per hour.

“It was kind of shocking because I thought a kid on the other team was going to win it because he was touching 94,” Wascom said. “He was slinging it. I was happy to get that award, but I’m ready to move on and compete in more events. Gotta keep the grind and keep moving on.”

Wascom said it was a fun event to play in.

“I really enjoyed pitching,” Wascom said. “I came in there and threw a lot of strikes, got a few punchouts and let my defense work. Just had to fill the zone and they were swinging and missing a lot. I didn’t really have to use the offspeed much.”

Wascom pitched first in relief in his first game.

“There was one out and there were runners on first and second. (The first hitter he faced) fouled like five fastballs off. I should’ve thrown him a curveball in the dirt, but I threw him a fastball and he squared it up. I had a couple of pitches to waste. They scored one run off of that, but the next guy flew out to center field and the (runner) from third tried to go home and he hosed him,” Wascom said.

Wascom’s second game was a start and he threw mostly fastballs. He threw five innings.

In a May 29 Tweet, Prep Baseball Report Louisiana has Wascom the second ranked right-handed pitcher in the Class of 2024 state rankings.

Wascom, who will be a sophomore in the upcoming school year, plays with the Knights Knation 15U National Team, which is based in Mandeville. The group went to the title game and came in second for the event.

The tournament had 68 teams.

Wascom plays second base and pitcher.

Wascom is the son of Jerod and Ashley Wascom and the grandson of James and Pauline Bankston and Rodney and Cheryl Wascom.