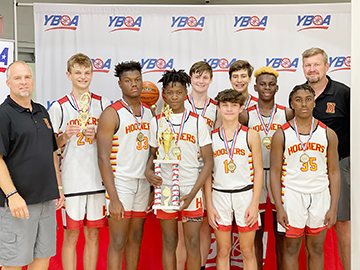 The Washington Parish Hoosiers 14U team captured the American Bracket at the Youth Basketball of America Tournament that was held July 5-8 in Winter Haven, Fla.

“It was good to see the kids enjoy going off for the whole thing of playing in the YBOA and going to Florida and then representing our area so good,” said Hoosiers coach Clay Thomas. “It made me proud. It wasn’t just one kid, it was a team effort. It made me feel like the hard work is paying off for them. It was a good trip and a good experience for them.”

The 24 teams were divided into six four-team brackets and the groups played a round of pool play that featured three games.

The top two teams from each pool went to the National Bracket with the other two going to the American Bracket.

The Hoosiers went 1-2 in pool play after being defeated in the first two contests before winning the last, which put them in the American Bracket. The 12-team bracket play tournament was single elimination.

Washington Parish posted a 4-0 record in bracket play to capture the American Bracket.

The Hoosiers are a travel basketball team in Washington Parish. Nearly every player is going into their freshman year of high school with one entering his eighth-grade year.

This is the team’s fifth season.

Besides winning the American Bracket in the YBOA Tournament, this year’s accomplishments have also featured tournament wins in the third annual Thunder Classic in Summitt, Miss. on June 26-27 and a win in the Silver Bracket at the third annual Stars and Stripes Tournament in Foley, Ala.

The group also has two second-place tallies in the YBOA Classic and the YBOA National Tuneup. Both of those tournaments were held in Mandeville.