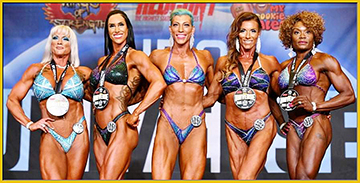 COURTESY PHOTO/Dan Ray Photo Bogalusa resident Brandi Beaudette earned her International Federation of Bodybuilding and Fitness pro card. She is pictured in the middle of the group that was top five in her class. Beaudette was first.

Brandi Beaudette is an International Federation of Bodybuilding and Fitness Pro.

The Bogalusa resident earned her IFBB Pro Card by winning the NPC Universe competition over several days in Charleston, S.C. Beaudette’s division, which was Women’s Physique, took place on July 1.

Beaudette needed to come in the top two in order to get her pro card.

“I’ve been pursuing this for five years, so it was a super sweet victory,” Beaudette said. “There were eight girls in my height class. They immediately put me on center stage. Because there were an even number of girls, I shared center stage with another girl, so I knew I was at least first or second and I was getting a pro card. At the evening show was when I realized I had won first. That’s when they called my name out. I definitely could not have gotten where I was without the Lord. It’s a beautiful story of redemption. My coach Ryan Hinton was vital. He adjusted my food, my water and my sodium intake perfectly, which allowed me to peak at the perfect time. So, going forward, I’m going to take some time off, about a year, and focus on growth.”

Beaudette said the growth will be putting size on her muscles.

“It’s going to change the way I eat and train,” Beaudette said.

Beaudette credited her husband for helping her reach this point.

“Having my husband (Ricky Singleton) at my side has allowed me to carry this to the end,” Beaudette said. “I couldn’t have done this alone.”

Beaudette said that competitors come out on stage according to number. She said center stage is the coveted spot.

Beaudette said she was surprised when she found out she won the event.

“It didn’t really set in until the next day,” Beaudette said.

Beaudette said she was not nervous at all at this competition. She feels it was because of confirmation from the Lord.

“I was the least nervous at this show than I have been at any other show,” Beaudette said.

The pro card allows Beaudette to compete against other professional bodybuilders and it means that she can no longer compete as an amateur.

Beaudette’s quest for her pro card started in 2016. She trained for two years before she went to her first show, which was in Biloxi, Miss.