‘Elsa’ not likely to affect Louisiana 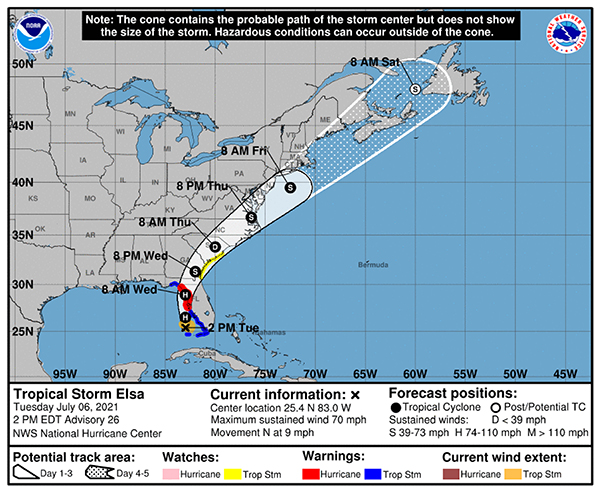 Times listed are in Eastern time.

While Tropical Storm Elsa will likely be in the national headlines this week, its local impact will be minimal, according to the National Weather Service.

NHS reports stated Tuesday that the storm, which had been momentarily upgraded to a hurricane earlier this month, was on track to bring most of its damage to Florida on Wednesday. Elsa was then expected to move up along the Atlantic coast, bringing the potential for flooding and wind gusts as high as 70 mph.

It is possible that Elsa may strengthen into a hurricane again as it continues its northeastern track.

The storm is not expected to affect Louisiana.

However, rainy days are expected for much of the rest of the week.

The NWS’s forecast for Wednesday calls for showers and thunderstorms in Bogalusa, mainly after 2 p.m. There may be additional showers later that evening as well — the chance of precipitation for Wednesday is 90 percent.

The chance of precipitation is 80 percent on Thursday, and 60 percent on Friday. Winds are expected to get no higher than 5 mph.