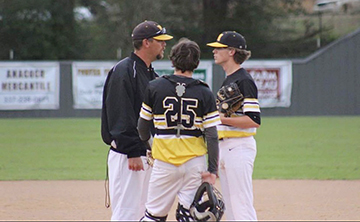 Matt Sessions has been named the head baseball coach at Bowling Green School.

This is Sessions’ second stint as the Buccaneers’ head baseball coach. He spent three years at the helm in his previous time there before going to Mt. Hermon School in 2014, where he has been until now.

“Obviously, my roots come from there,” Sessions said. “I’ve got a lot of ties to that school and I’m excited to head back to it.”

Sessions, who is a 2004 Bowling Green School graduate, helped the Buccaneers reach the playoffs in two of his three years.

Sessions helped guide the Yellow Jackets to the playoffs every year since 2016 except the 2020 season, which was cut short because of the COVID-19 pandemic. The team won one playoff game under Sessions — that was in 2018. They also won the district title this season for the first time since 2004.

“It was a good situation and I have a lot of respect for Mt. Hermon,” Sessions said. “I wish them nothing but the best and I thank them for the opportunity.”

Sessions will also be the Dean of Students at Bowling Green.

“It’ll definitely be a transition,” Sessions said. “Stepping into the new administration role will be different, but one that I’m excited about.”

Bowling Green Principal Phill Junkins said they are extremely excited about having Sessions joining the school.

“He’s returning home,” Junkins said. “He’s got great character. He played for me and he was one of the hardest working young men I’ve ever coached. He’s a phenomenal young man and that’s why I hired him.”