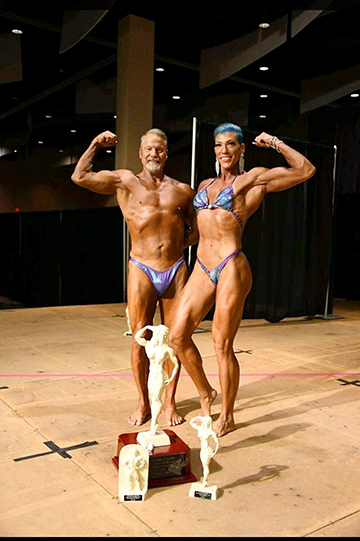 Both competed in the sixth annual Battle on the Coast in Biloxi that was held on June 12, while Beaudette was also in the National Physique Committee Junior Nationals on June 18-19 in Chattanooga, Tenn.

Beaudette won the physique and Class B competitions in Biloxi.

There were two people in physique and one person in Class B.

“It was a great show. It was put on by Doug Sellers,” she said.

She said that this is more of a local show and is a National Qualifier.

Beaudette was back in competition the following week at Junior Nationals in Chattanooga. This is a pro qualifier where body builders can earn their pro card. In order to do that, they have to win first place.

“It’s a much bigger production,” Beaudette said. “There was a lot more competition. There were 13 girls in physique. Every one of those girls won at least first or second in a national qualifier.”

Competitors have to be invited to compete in this show by coming in first or second at a national qualifier. Beaudette got the invite last August in Tupelo, Miss.

Beaudette will be back on stage on Thursday in Charleston, S.C. for the NPC Universe.

Beaudette will have the link to the show on her Facebook page.

If Beaudette comes in first or second, she will receive her pro card. Beaudette said that each show has a certain number of pro cards they can give out.

“I am excited,” Beaudette said. “Like I’ve said before, nothing brings your confidence like having a great coach and I have a great coach.”

Beaudette’s coach is Ryan Hinton, who is a International Federation of Bodybuilding pro and a two-time Olympian.

Singleton competed at Battle on the Coast and came in fourth.

Singleton was 10 years older than his weight group. The 63-year-old competed in the 50-aboves.

“It was a lot of fun,” Singleton said. “It’s hard to compete against those young boys, but it’s an honor. We all work hard, but for them to come up to me and tell me that they hope they look like I do when they get to my age, that’s a win.”

Singleton said the competitors came together and prayed together.

“That’s our main thing because God has given us so much and it’s time to give back to him. We want to honor him,” Singleton said. “These shows are his platform and we’re just using it and we’re grateful for what we do.”

Singleton will compete again in August in Tupelo.