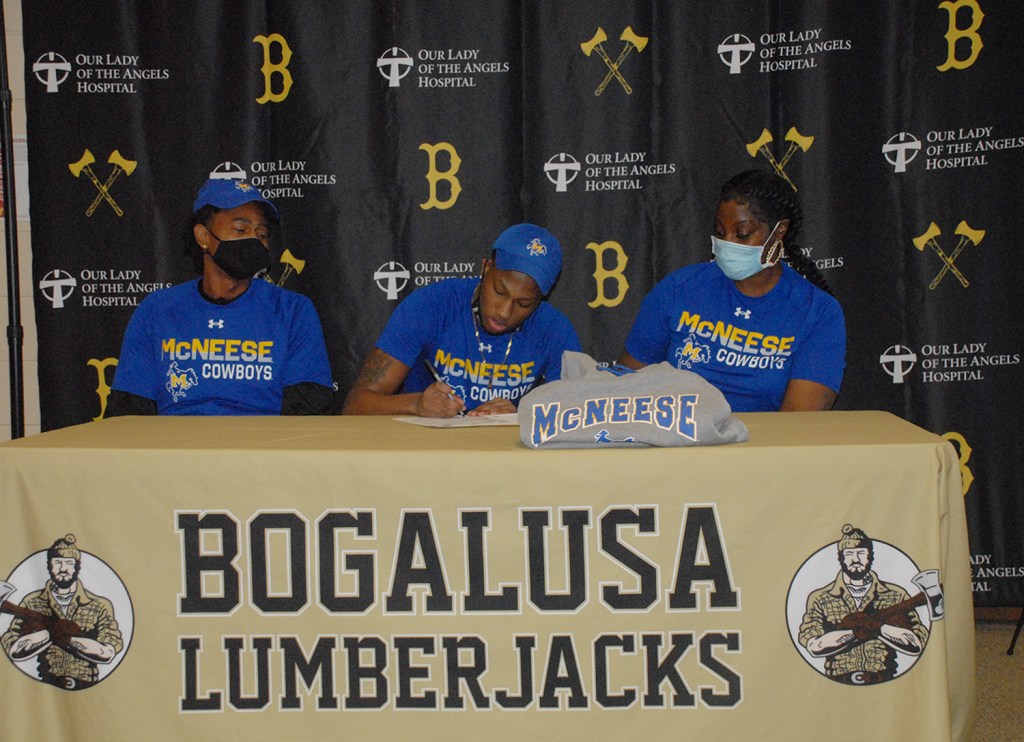 Daily News Photo/Chris Kinkaid Raheem Roberts has signed a National Letter of Intent to attend McNeese State University and to play football for the Cowboys. He is seated in the first row, flanked by Richard Morris (father) and Shemay Roberts (mother).

Bogalusa’s Raheem Roberts signed a letter of intent to attend McNeese State University and play football for the Cowboys.
“McNeese, it’s a good school. (McNeese State football coach) Frank Wilson has coached some of the best players like Leonard Fournette and Tyrann Mathieu and I think that’s a good fit. It’s not too far from home and my family can come watch me play,” Roberts said.
Roberts said he is very excited about going to McNeese State.
“I have high expectations for my first year,” Roberts said. “I want to start as a freshman. I’m ready to go there and work.”
Roberts, who played wide receiver and defensive back for Bogalusa, was a first-team all-district player the last two years and he was a second-teamer his sophomore season. His sophomore year was at wide receiver. His junior season was at wide receiver and defensive back with his senior season being at wide receiver, defensive back and returner.
Roberts talked about his strength on the field.
“I’m good at high-pointing the ball. I can see the field. Good route running, speed and my IQ,” Roberts said.
Adam Brumfield, who coached Roberts his final three years at Bogalusa, praised his college signee.
“He’s a great kid,” Brumfield said. “He has all the size and speed he needs to play college football. He finds a way to make big plays when the game is on the line which is something that all coaches want out of their play makers. He has a very bright future.”
Academically, Roberts posted a 3.8 grade point average with honors at Bogalusa.
“That’s my No. 1 priority,” Roberts said. “If you