The camp had 67 participants.

“I thought it was a great turnout,” Franklinton baseball coach Jeff Tageant said. “We had a lot of quality players. I like that they learned a lot and they had fun, which are our two main objectives. We want them to learn baseball and enjoy the camp.”

Tageant said about 20 Franklinton players worked at the camp.

“When you have to teach the skill, it makes you learn more about it,” Tageant said.

Besides Tageant and the players, the rest of the coaching staff included Franklinton assistant coaches Clay Tageant, Major McElveen and Dustin Kahle along with Evan Tageant, who was the Franklinton Junior High coach this year. The staff also included two former players in University of New Orleans outfielder Jamarian Crain and Austin Bradford, who capped off his college career at the University of Louisiana at Lafayette this season. Both Tageants and McElveen are former Demon players.

The participants also did position drills, which was based on where the campers play.

The group also played games after lunch, which Jeff Tageant said were spirited. 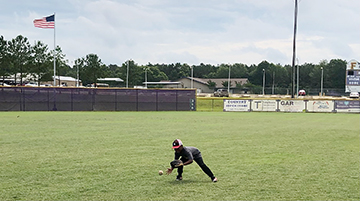 Jeremiah Drury attempts to field a ground ball at the Demon Baseball Camp.