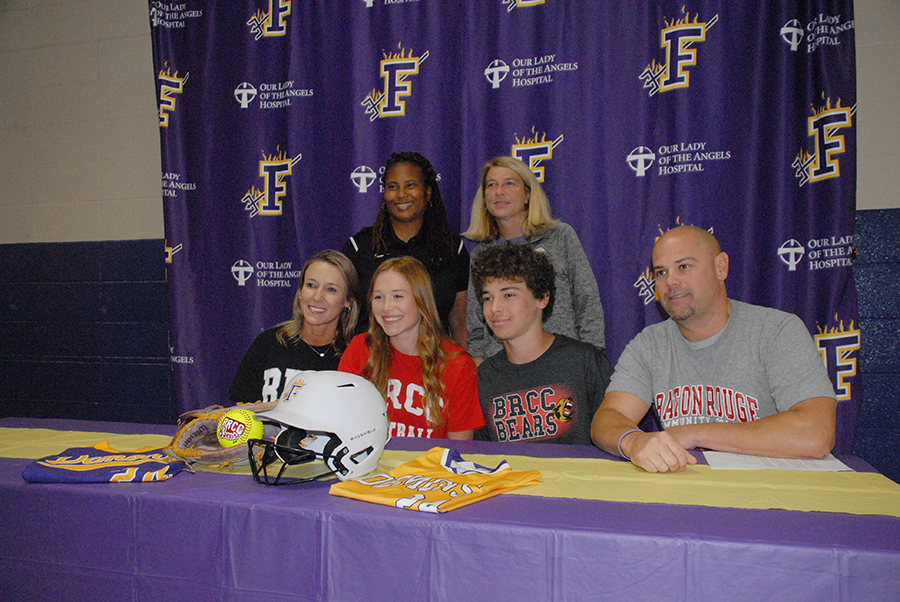 Franklinton’s Brylie Fowler has signed a letter of intent to attend Baton Rouge Community College and to play softball for the Lady Bears.

“It was one of the better decisions for me because I knew people going there like (teammate) Aleigha (Fussell) and a couple of girls from our district. It’s also not too far from home and it’s in state,” Fowler said.

Fowler played second base for the Lady Demons and had some time at shortstop.

Fowler had a .372 career batting average. This year, she had the highest batting average in the district during league play. It was .696. Her on-base percentage was .765.

Fowler was a first-team all-district player infielder every year except last season. The majority of last season was cancelled because of the COVID-19 pandemic.

Fowler talked about her key to success.

“We practiced everyday and I always went and hit with coach Evan Tageant, and he helped me with my batting, and my dad would always pitch to me and hit me ground balls whenever I wanted him to,” Fowler said.

Franklinton coach Leslie McGhee said it has been a pleasure to have been able to coach Fowler over the last four years.

“Brylie is an outstanding athlete and has been a big part of our softball program at Franklinton High School,” McGhee said. “Her work ethics and leadership never cease to amaze me. Brylie spent countless hours in the cages and at the field putting in the extra work. She is a great leader and I know that she will excel at anything she puts her mind to.”

Besides softball, Fowler played soccer and was a second-team all-district player this season.

She played center midfield her sophomore and junior years before going to striker this season.

Off the field, Fowler had a 3.85 grade point average.

Fowler said that academics are very important to her.

“I had to keep good grades all through high school. I was trying to keep my GPA up so colleges would want me not just for athletics and also for academics,” Fowler said.

Fowler plans on majoring in biological science. After Baton Rouge Community College, Fowler said she plans on transferring to the LSU School of Dentistry in New Orleans and wants to be a dental hygienist.