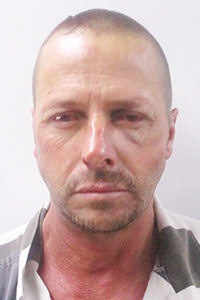 On Wednesday, a Washington Parish Sheriff’s Office patrol sergeant responded to a report of an intoxicated man creating a disturbance at a parish residence, according to WPSO Chief Deputy Mike Haley.

Fred Allen Howell, II, 45, a resident of Main Street in Franklinton, was arrested and charged with being a fugitive from the Louisiana Division of Probation and Parole, two counts of failure to appear in court and battery of an infirmed person.

Haley said that when the officer initially arrived at the scene, Howell had left after physically assaulting a resident and knocking him to the ground, then going to his truck and returning to the residence armed with a hammer. Other residents were able to take the hammer from Howell, at which point he drove off in his truck, Haley said.

“Shortly thereafter, the Sheriff’s Office got another call from residents stating that Howell had returned and was creating another disturbance,” Haley said. “When the patrol sergeant arrived back on the scene, Howell was still there, very agitated and unsteady on his feet. Howell was arrested and transported to the Washington Parish Jail.”

“Going to another residence, creating a disturbance, then punching a resident, is a ticket to jail,” he said. “Such behavior won’t be tolerated and I am grateful to our officer for getting an intoxicated and belligerent man out of our community and into our jail.”