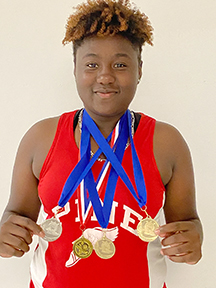 COURTESY PHOTO Pine’s Makia Clark is pictured with her medals from the district and regional meets. Clark was third in Class 2A for the discus with a throw of 102 feet, 8 inches.

Pine’s Makia Clark capped off her senior year in track/field by standing on the podium at the Class 2A state meet that was held on May 7 at LSU’s Bernie Moore Stadium.

Clark was third in Class 2A in the discus after throwing it 102 feet, 8 inches. Delhi Charter’s Ashari Jones won the title with a throw of 106-10.

Clark is the first person in Pine High School history to place at state in track/field.

“As soon as I placed in third and realized I placed in third, it almost made me cry, but I couldn’t cry because I had graduation,” Clark said. “When I went to the school, my mom (Kenasha Cotton) told my principal (Jennifer Thomas) and my classmates. When I walked into the gym before we went to the football field for the graduation, I got a round of applause.”

Clark talked about standing on the podium.

Clark said that her inspiration for moving forward in track/field was her uncle Earl Cotton Jr.

This was Clark’s second time reaching state. She went her sophomore year when her brother and former Pine athlete Markel Cotton reached state.

Clark, who has been throwing the discus since the eighth grade, came in fifth in the discus her sophomore year with a throw of 108-10.

The majority of last season was canceled because of the COVID-19 pandemic.