Pine’s Clark captures the discus in Region 2-3A Meet 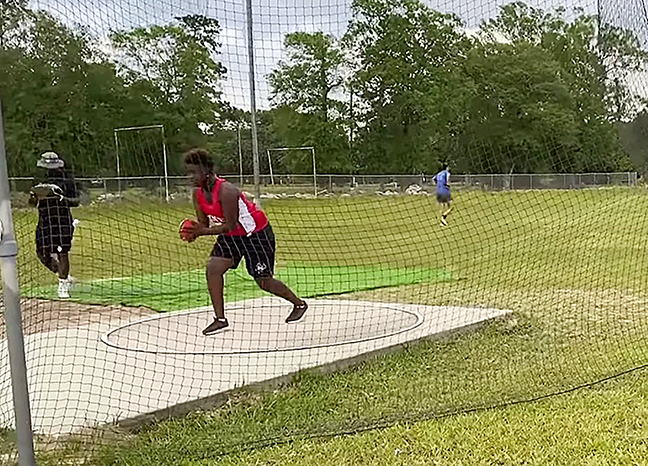 COURTESY PHOTO Pine’s Makia Clark prepares to throw the discus in a meet. Clark won the discus at regionals and competed in state on Friday at LSU.

Pine’s Makia Clark is headed to the state meet after capturing the discus in the 3-2A Regional Meet that took place on April 27 at Ponchatoula.

The meet was a qualifier. The top three from each event have advanced to the Class 2A state meet that takes place at LSU’s Bernie Moore Track Stadium.

Several more locals competed, as Pine and Varnado were the schools from Washington Parish in the meet.

Pine’s Cameron Magee was seventh in the 800 meters after running it in 2 minutes, 59 seconds. St. Thomas Aquinas’ Breanna Becerra won in 2:24.

Pine’s Hannah Hughes and Varnado’s Magee were ninth and 11th for the discus.

Isidore Newman won the team competition with 164 points with 13 teams posting at least one point.

St. Thomas Aquinas was second with 136, followed by Amite’s 62, Louise S. McGehee’s 57 and Northlake Christian School rounded out the top five with 36. Pine was 10th with 14.