Demons move to the quarterfinals 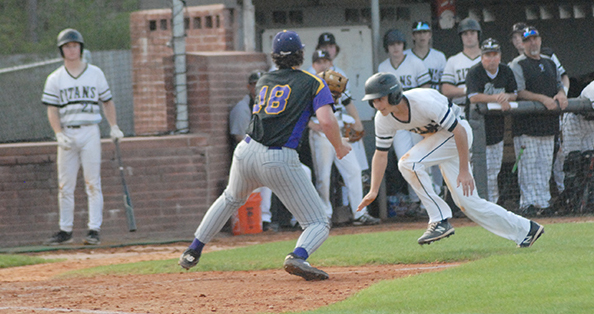 DAILY NEWS PHOTO/Chris Kinkaid Franklinton’s Jordan McKenzie tags out a runner to cap off a rundown in a game this season.

Franklinton’s Demons captured a three-game series over Rayne and moved on to the Class 4A in games held April 30 and Saturday at home.

Franklinton took a 1-0 lead in the series with a 6-4 win on Friday.

Trayshun Warren posted two extra-base hits with a double and a triple to go with two runs scored and a run batted in.

Daylin Sigler recorded a hit and a run batted in.

Rickey Burkhalter had a hit.

Will Turner drove in a run.

Wascom got the save after throwing the seventh, allowing one unearned run on no hits with two strikeouts and two walks.

Games two and three were on Saturday.

Franklinton was defeated in game two, 4-1.

McKenzie singled and drove in a run.

Chase Penton, Sigler and Isaac Wascom all had one hit.

That brought the series to a deciding game and Franklinton was equal to the task.

Franklinton got down 4-0 after the top of the first inning, but the Demons responded with six in their half of the inning and went on to a 16-6 five-inning victory.

McKenzie went 2-for-2 with four RBIs and three runs scored.

Micah Wascom had two hits including a double with an RBI and three runs scored.

Sigler singled, drove in three runs and scored a run.

Banyan Penton singled, drove in a run and scored a run.

Burkhalter singled and scored a run.

Isaac Wascom recorded a hit and a run scored.

Jaheim Jefferson and Rickeen Burkhalter both scored a run.

“I was very proud of the team facing adversity and responding to it,” Franklinton coach Jeff Tageant said. “We really swung it well in games one and three. After going down by four in the first inning in the third and deciding game, the guys really responded putting up six runs. That was the turning point.”

Sixth-seeded Franklinton improved to 25-5. The Demons move to the quarterfinals to play against third-seeded North Vermillion, which began the series at 28-7. North Vermillion defeated No. 14 Carencro (20-16) in three games. North Vermillion was topped in the first game, 3-1, before winning the final two contests, 8-5 and 15-14.

The first game between Franklinton and North Vermillion is today at 4 p.m. Games two, and if necessary, game three, will be on Saturday, May 8. Game two will start at noon.

All games will be at North Vermillion.