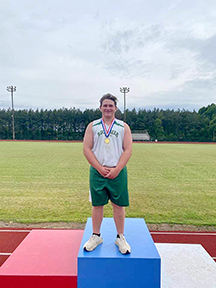 Bowling Green School’s Aiden Hodges is an MAIS Class 3A Champion in the shot put after capturing the title in the MAIS Overall Track/Field Meet that took place at Canton Academy on Friday.

The athletes competed for class titles.

“It feels good to be in ninth grade to win this. Every single one except for one (of the athletes that Hodges competed against) was a 12th grader,” Hodges said. “I worked hard for this. I worked out everyday. I worked on form. I videoed myself and I did that for two weeks and worked out for an hour after that.”

The other competitor was a junior. There were eight athletes vying for the title.

The work paid off, as Hodges won by setting a personal record of 43 feet, 1.75 inches. Carroll Academy’s Cooper Beck was second at 42-8.5.

Hodges’ PR previous to Friday was 42-0. He actually broke his personal record on his third attempt with a 42-1 and then reset his PR over his next two throws, which were 42-5 and then the winning distance of 43-1.75.

Hodges talked about his first time being at the Overall Meet.

“I’m beyond proud of this young man and his great accomplishment! He worked hard and achieved great things! It was an awesome competition!,” Matise said.

After winning the title on Friday, Hodges went back to working out for football on Monday.

On the gridiron, Hodges plays right end and right guard.