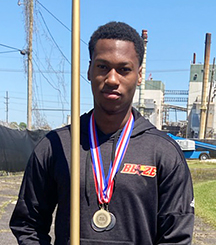 Bogalusa’s Raheem Roberts was victorious in the javelin at the Region 3-3A Meet that took place at West Feliciana on Wednesday.

Roberts threw the javelin 156 feet. Madison Prep’s Zeon Chriss was second with a distance of 150-6.

The competition was a qualifying meet. The top three finishers from each event are headed to state. The Class 3A state meet will take place on Friday at LSU’s Bernie Moore Track Stadium. Bogalusa is the only LHSAA Class 3A team from Washington Parish.

Roberts was fourth in the high jump after finishing in a five-way tie for second with Kenner Discovery Health Sciences Academy’s Labyron Martin, Parkview Baptist’s Logan Harris, Madison Prep’s Brian Chatman and Archbishop Hannan’s Jaylen Taylor at 5-10. The tiebreaker is fewest misses, so Martin was second with Harris third, Roberts fourth and Chatman and Taylor fifth and sixth. Baker’s Jakhari Rogers won the event at 6-0.

Kalik Foster was seventh in the discus with a throw of 110-3. West Feliciana’s Adarius Franklin won with a distance of 141-9.

Haikem Thompson took eighth in the javelin with a throw of 130-0.

In the girls, Mary Ladner was seventh in the 100 meters with a time of 13.34 seconds. Patrick Taylor Science and Technology’s Amairi Ashford  won in 12.70.

Patrick Taylor Science and Technology was second with 74, followed by Brusly’s 69, Parkview Baptist’s 66 and Academy of the Sacred Heart rounded out the top five with 43 points.