Lady Raiders host, win for the 1st time in postseason 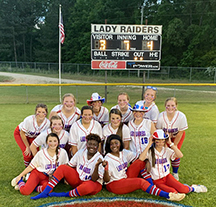 COURTESY PHOTO Pictured is Pine’s softball team, which hosted and won its first playoff game in program history on April 19.

The Lady Raiders hosted their first playoff game in program history and then they made more history by winning a postseason contest for the first time in softball.

The contest was a 4-3 win on a walkoff single by Kirbee Magee that sent Kiyasha Clark home with the winning run.

That put No. 14 Pine in the regional round against third-seeded Rosepine and the Lady Raiders were defeated, 11-0, in five innings the next day.

This year’s team had two seniors in Clark and Makia Clark.

“My seniors will be greatly missed!  They have went out with a bang making school history times two — first home playoff game and first playoff victory,” Pine coach Stephanie Sumrall said. “We, as a team, will try our best to live up to the goals and expectations that they have set!”

Third-seeded Rosepine (28-3) is now in the state semifinals and faces second-seeded Doyle (28-5) on Friday in Sulphur.