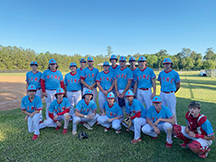 COURTESY PHOTO Pictured is Pine’s baseball team. The group won the District 8-2A title with a 7-0 record.

Pine wrapped up the District 9-2A title on April 15, going undefeated, and Mt. Hermon topped the Raiders in non-league play on Monday.

Pine’s win on April 15 was 11-1 over Kentwood at home to go undefeated in league play with a 7-0 record.

Bryson Thomas singled, had an RBI and two runs scored.

Coby Sheridan singled, scored a run and posted an RBI.

Clint Miley had a hit and a run scored.

Lucas Lemaire singled and drove in a run.

John Eric Self scored a run.

Mt. Hermon’s Jordan Harrison went 2-for-3 with a double and a run scored.

Trent Wilson tallied a single and a run scored.

Tevin Williams singled and drove in a run.