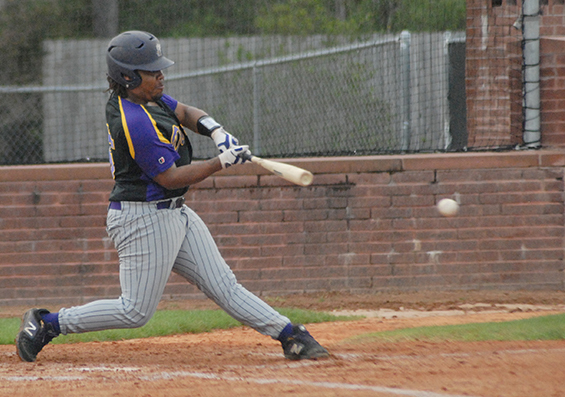 DAILY NEWS PHOTO/Chris Kinkaid Franklinton’s Rickey Burkhalter makes contact with a pitch in a game this season. The Demons won the District 9-4A title after going 6-2 in league play.

Franklinton’s Demons clinched the District 9-4A title on Wednesday and posted a 2-1 record in District 9-4A games held Tuesday through Thursday.

On Tuesday, Franklinton defeated Salmen, 12-1, in five innings at home.

The Demons scored six runs in the third and fifth innings.

Daylin Sigler went 2-for-3 with three runs batted in and a run scored.

Jordan McKenzie singled, scored a run and had an RBI.

Trayshun Warren scored two runs and drove one home, while Isaac Wascom and D.J. Corkern both scored a run.

Will Turner threw all five innings, allowing no earned runs on three hits with five strikeouts and four walks.

The next day was an 11-4 victory over Pearl River on the road.

McKenzie posted two doubles with two runs scored and a run batted in.

Burkhalter singled and drove in a run.

Dillon Pace pitched in relief, allowing one unearned run on three hits with a strikeout and no walks.

On Thursday, Franklinton was topped by Salmen, 5-4, in eight innings.

Turner went 2-for-4 with a run scored and an RBI.

Warren posted a hit and an RBI.

Despite the loss, Chase Penton was solid in relief. He went five innings, allowing just one run on four hits with eight strikeouts and three walks.