Clean up continues at Mile Branch; citizens can donate 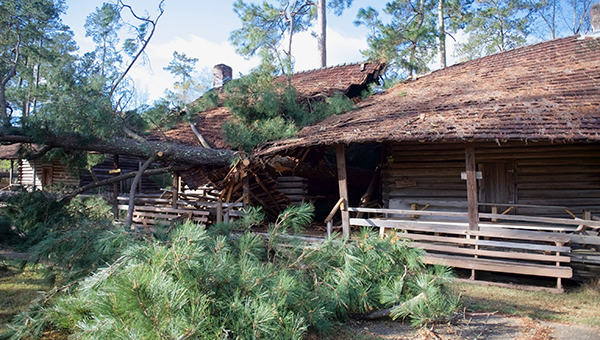 A combination of weather and vandalism has caused heavy damage at the Mile Branch Settlement. A donation fund has been set up for those who wish to contribute to the repairs. (Courtesy photo by Regina Meyerchick)

The Washington Parish Free Fair executive committee, along with hundreds of volunteers, are still reeling from the recent one/two punch received at the hands of Mother Nature and in the form of vandals.

Following a severe weather event on the evening of March 17, committee members were devastated by the sight of nearly 20 downed trees, the destruction of a restroom facility and — most heartbreaking of all — widespread damage to the Mile Branch Settlement. The Sylvest Cabin complex, one of the largest cabins in the settlement, was nearly completely destroyed by a massive pine tree that essentially cut the structure in half.

Work began almost immediately to salvage the building and its contents. The cabin is being dismantled, with each log and shingle painstakingly labeled so that it can be put back together with necessary repairs. This is similar to the process that was used some 40 years ago when the various buildings located throughout the parish were taken down and reassembled at the settlement.

The subsequent vandalism by juveniles the following weekend added insult to injury. Because the alarm system was off due to storm damage, vandals were easily able to access buildings and destroy antiques housed in the cabins as well as family heirlooms on display.

While there is an expectation of restitution for the vandalism damage, the storm damage is another matter. Fair board president Cole Ladner reiterates, “There was damage throughout the fairgrounds that must be addressed before the 2021 edition of the fair. Since we were unable to have the fair last year, our expected income to prepare for this year was almost nothing. It will be a financial challenge to repair all the damage, remove the downed trees, and rebuild the destroyed restroom as well as make the grounds safe for fairgoers.”

Longtime volunteer and fair secretary Kaye Ladner added, “I am one sad volunteer! Mile Branch is such a beloved area to all fairgoers and a showplace of life as it was in the early years of the parish. However, I believe this community can pull together and be ready for the fair as usual in October.”

Ladner further explained that a separate fund has been set up at Citizens Savings Bank for those who want to make monetary donations to assist with the biggest need, the restoration of Mile Branch. Donations should be specified for the “Washington Parish Fair/Save the Mile Branch Settlement.” It is important to be specific, as the fair association has several accounts at Citizens Bank. Contributions will be accepted at both the Franklinton and Bogalusa headquarters.

Several groups have offered assistance in the actual cleanup, but Building and Grounds Chair Donald Folse points out that the fair association must first consider the safety of any volunteers. Currently, some of the cabins are unstable and the 20 or so trees destroyed were massive in size. There will have to be a team of professionals with a safety protocol to begin the restoration and get to the point where volunteers can then pitch in and help.

Groups, clubs and individuals who do want to volunteer time are encouraged to stay updated on the work on the WPFF website and Facebook page, so that when the call goes out for help, anyone who can lend a hand will know.

This article was written by Toni Tageant, for The Daily News.