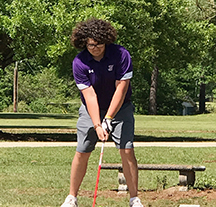 Temples tallied a 93 to win.

Bogalusa’s Jahee Roberts posted a 100, while teammate Desmond Johnson posted a 108 and Franklinton teammates Santino Nuzzerillo and Mason LaSalle posted scores of 123 and 125.

One local female competed in Franklinton’s Madeleine Burris and she tallied a 133.

Both teams will compete in their district meets in the upcoming week.

Bogalusa plays on Monday at Riverlands Golf and Country Club in LaPlace.

Franklinton is headed to Bayou Oaks’ south course in New Orleans on Tuesday.