Two Bogalusa residents and Pope John Paul II football players are second-team all-district players for this season in 10-2A.

George Arata and Kael McDaniel, who are also former Annunciation Catholic School students and former players for the Crusaders, made the second team.

Arata, who is a junior, is a quarterback.

This season, Arata played in the NUC Sports All American Game that took place in Savannah, Ga. in late December.

McDaniel, who is a freshman, is a defensive lineman.

Pope John Paul II’s Kael McDaniel attempts to get past a block in a contest. McDaniel, a Boglausa resident, is a second-team all-district player. 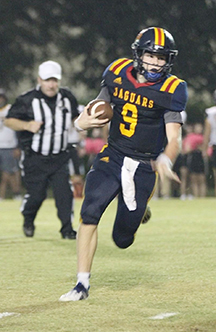