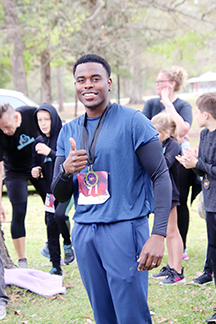 The Dogwood Ladies League hosted the first annual Dogwood Dash on March 20 at Cassidy Park to help raise money for Christmas in the Park.

The race was heralded as a success by all in attendance and plans are already in the works to have a second annual Dogwood Dash in the coming year. Although there were many individual runners, there were also runner groups from HL Brownstone, as well as the youth from Northshore Track and Field and Bogalusa High School JROTC.

Nearly 100 people registered for the race with 70 running.

At the medal ceremony, Tammy Sheridan announced the addition of an ice skating rink to the attractions of Christmas in the Park. Sheridan hopes that this will be the beginning of additions that will rival the Christmas festivities of those outside of our area.

Dogwood Ladies League member, Tammy Sheridan, met with other members and determined that a spring 5K would be a wonderful fundraiser for Christmas in the Park. When she contacted the board of CITP, they were humbled and began contacting businesses to help sponsor the event. They ended up with nearly 50 sponsors. On a chilly Saturday morning, March 20, nearly 100 runners set off to run the course through Bogalusa. Representatives from the Dogwood Ladies League stood at every turn of the race, waving signs, ringing cowbells, and cheering on each participant.

Raymond McGriggs was the overall winner.

Remy Lambert was runner up with Isaiah Brown coming in third.

In the age groups, Ava Godwin won the female 10-under, while Jackson Creel was the fastest male 10-under.

Lily Smith was the fastest female in the 11-15s, while Braxton Burt won the 11-15s male age group.

Kassi Creel bested the 21-30s females, while Sam Adams had the fastest time for the males.

In the 41-50s, LaManda Taylor won the females, while Wayne Palmer was victorious for the males.

Linda Keller was the 51-older female winner, while Mickey Dillon had the best time in the males.

The Dogwood Ladies League is a philanthropic civic organization consisting of 30 ladies from around Washington Parish. Every year we donate to various organizations around our community. Annually, members vote on a single cause to support during our spring fundraiser. This year, we chose to support the Bogalusa Christmas in the Park. We chose this because of the destruction brought on by multiple vandalism incidents during the 2020 Christmas in the Park season.