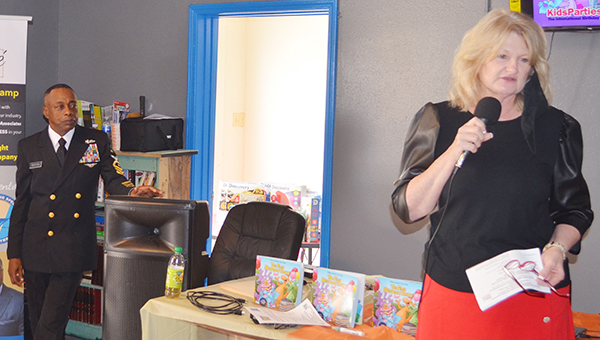 Lisa Tanner, superintendent of the Bogalusa City Schools, expresses her thanks for the donation to local children. Looking on is U.S. Navy Ret. Master Chief Petty Officer Christopher Penton, a Bogalusa native.

A Bogalusa native and retired naval officer returned home Wednesday, March 24, to make a presentation and help give back to his community.

U.S. Navy Ret. Master Chief Petty Officer Christopher Penton visited the Blessed Be On Measure Youth Center that day, to help make the announcement that the local youth center had collected a portion of 5,000 books and associated materials to donate to Bogalusa city schools.

Penton now serves as a senior consultant for Force Penton and Associates, located in the Memphis, Tenn., metropolitan area. His consulting firm was one of the major sponsors for the book donation giveaway.

“There a lot of positive things going up in Bogalusa,” Penton said. “This is just the foundation.”

Penton said he was happy to return to his hometown, and noted Bogalusa’s unique characteristic of actually ending in the letters “U.S.A.” He also said that he had created a poem to describe Bogalusa — “Because Of God And Love you (U) Shall Achieve.”

Lisa Tanner, superintendent of the Bogalusa City Schools, thanked Penton for his attendance and assistance with the project.

“Thank you for coming back to your hometown and doing what you can for our children,” she said.

The donation to local schools includes not only books, but also other materials. The book, titled “The First Birthday Party Ever,” has an associated teacher’s study guide and worksheets. It also can be used with a smartphone app to add “3-D interactive augmented reality” to make the book come to life even more.

The schools will also receive “STEM” (science, technology, engineering and math) kits that include experiments, models and other science-related activities.

The presentation was intended to announce the start of Blessed Be On Measure Youth’s Center new American Literacy, STEM and Economic Development Program. The center was established in 2012, is a 501(c)(3) non-profit organization, and Presious Jackson Anderson is the founder.